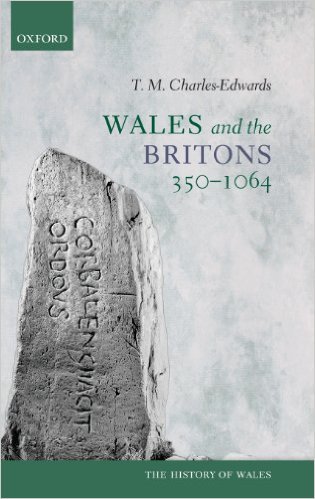 The Britons, then, never left the Roman Empire. That is, they may have rebelled against particular emperors, but they never finally renounced imperial authority. (p. 241)

This review is something of a departure from my own historical field, but I have long had an interest in Sub-Roman Britain and the Britons, as well as the early history of Wales, so I took this monumental tome away with me for some holiday reading. I was interested primarily in the first part of the book, ‘After Rome’, (pp. 31-241), which covers the period 350-664, from the years immediately preceding the ‘Barbarian Conspiracy’ of 367 to the Council of Whitby. Like all the books I like best, Charles-Edwards’s cuts across established periodisations, in this case between Late Antiquity and the early medieval era. Wales and the Britons is undoubtedly the best book I have read about the elusive Britons, and it is hard to imagine how it might be bettered, unless major archaeological discoveries change our perspective.

As might be expected, Charles-Edwards provides a thorough analysis of the usual historical sources for the Britons, namely Gildas’ De Excidio Britanniae and Bede’s Historia Ecclesiastica. His decision to provide also an extended treatment of the work of Pelagius and Faustus of Riez (the only surviving British authors, apart from Gildas, of the fifth and sixth centuries), was both refreshing and interesting – as was his decision to ignore the supposed insights of ‘Arthurian studies’ completely. The Arthur issue is like a bog in which Brythonic history usually gets caught until the reader loses interest – or at least, that has sometimes been my experience in the past. The most exciting and innovative features of Charles-Edwards’s book, however, and the reason I bought it, is his meticulous analysis of Sub-Roman inscribed stones as evidence for the Sub-Roman Britons and the survival of British Latin.

Charles-Edwards advances a convincing argument that British Latin – that is, a form of spoken Latin learnt in the cradle by Britons – survived until around 700. This is evidenced by the morphology of the Latin on the inscribed stones, which shows the same sort of features as late Latin turning into Old French in Francia. Charles-Edwards concludes that British Latin – perhaps we ought to give it a less long-winded term like ‘Bratin’ – was on the way to becoming a Romance language, comparable to Old French, at the time of its extinction. British Latin was spoken, Charles-Edwards believes, in the more Romanised parts of Sub-Roman Britannia, such as Gwent (the old land of the Silures focussed on the civitas capital of Caerwent), Dumnonia (focussed on Isca Dumnoniarum, modern Exeter), and the capital of Britannia Prima, Corinium (which, according to the Anglo-Saxon Chronicle, did not fall to the Saxons until 577). However, Saxon conquest combined with the increasing importance of the purely British-speaking hinterland (e.g. the Kingdom of Gwynedd) as the cultural core of the Brythonic cultural sphere led inevitably to the extinction of British Latin as a spoken language learnt from birth. However, this does not mean that Latin was extinguished in British areas – Christianity and monasticism ensured that Latin remained a language of instruction and education in British monasteries, without a break, from the Roman era to the early medieval period.

Charles-Edwards’s thesis regarding British Latin reflects an over-arching theme of the book, which is the ongoing romanitas of the Britons, not only in their continuing adherence to Roman customs but also in their political self-understanding as Roman citizens. The author thoroughly debunks the old idea that Britain ceased to be Roman when the legions were withdrawn in 410; Rome continued to claim Britain and to regard Britons as citizens of the Empire. British and Welsh writers, into the early Middle Ages, repeatedly described their own people as ‘the citizens’, over against the barbarian Saxons. Unlike the Gallo-Romans, who found themselves forging a new nation of Francia in an alliance with the barbarian Franks, the Britons existed in a binary opposition with the heathen Saxons and defined their identity through a combination of themes drawn from pre-Roman Iron Age society and the Roman inheritance.

One striking example of ongoing British romanitas is an inscribed stone in the grounds of the Eagles Hotel at Penmachno in North Wales dating from the period 567-79, which makes reference to the three consulships of the Emperior Justin II. One poet noted that Justin was praised, even in far-off Britain, for his attempts to reconcile the western kingdoms to the Empire, and the inscription bears this out to some extent. What is especially interesting is that the inscription refers not to Justin as Emperor but as Consul – which, of course, was the correct Roman way to determine dates but also suggests a degree of sophisticated romanitas on the part of the Britons of sixth-century North Wales – not only did they still know who the Emperor was, but they also knew the proper way to refer to him. Other relics of romanitas also survived, such as the uncia as a unit of land (this derived from the land belonging to one man – unus – in a Roman civitas), and the practices of capillatoria (cutting of a new-born baby’s hair) and barbatoria (cutting of an adolescent male’s first beard), which are testified in the story Culhwch and Olwen. Another relic was the tendency of Welsh authors to speak of Llundain or Caer Llud (London) as a symbolic seat of government at a time when Westminster was the centre of English power – Charles-Edwards suggests that this could have been a dim memory of old Roman Londinium.

Indeed, so attached were the Britons to the idea of the Roman Empire that, according to Bede, as late as 668 Ebroin imprisoned Abbot Hadrian on his way back to Britain ‘because he was suspicious that he might have undertaken an embassy from the emperor [Constantine IV] to the kings of Britain’ (Historia Ecclesiastica IV.2). However, Charles-Edwards argues that the Synod of Whitby of 664, which condemned the Britons for failing to observe the Roman calculation of Easter, marked a turning point in the relationship between the Anglo-Saxons and romanitas. From then on, Christian Anglo-Saxon kings began self-consciously constructing themselves as ‘Roman’, and the Welsh as barbarian, and this English narrative drowned out the pre-existing British one. Indeed, Charles-Edwards draws attention to the paradoxical importance yet invisibility of the Britons in early English historiography. On the one hand, the British contribution to the survival of Christianity in the island of Britain, not to mention the British conversion of Ireland which in turn sent missionaries to the English, was obvious. On the other hand, the British contribution is often not even considered by Bede.

I could not help reflecting, whilst reading Charles-Edwards’s book, on the paradox that Britain’s indigenous people, the Britons, were more ‘civilised’ than the Anglo-Saxons whose colonial narrative has been imposed on them. Like many indigenous peoples since, the Britons were re-constructed as aliens in their own land, acceptable only if they either assimilated themselves to Anglo-Saxon society or defined themselves as a geographically separated other, the Welsh. Yet Wales is in many ways an artificial construct, as Charles-Edwards demonstrates, and in the Germanic languages Walas referred to any inhabitant of the old Roman Empire; the Cornish were long known as the West Welsh. As a consequence of the colonial narrative imposed by Bede and others, people living in England – most of whom genetic surveys suggest may be descended from the Britons – have been prevented from identifying with their British ancestors. In some ways it is regrettable that Charles-Edwards’s book is one volume in an ambitious history of Wales by OUP – for it is much more than a history of Wales, but rather a history of all Brythons, who were the ancestors of a large proportion of all people now living in the UK.