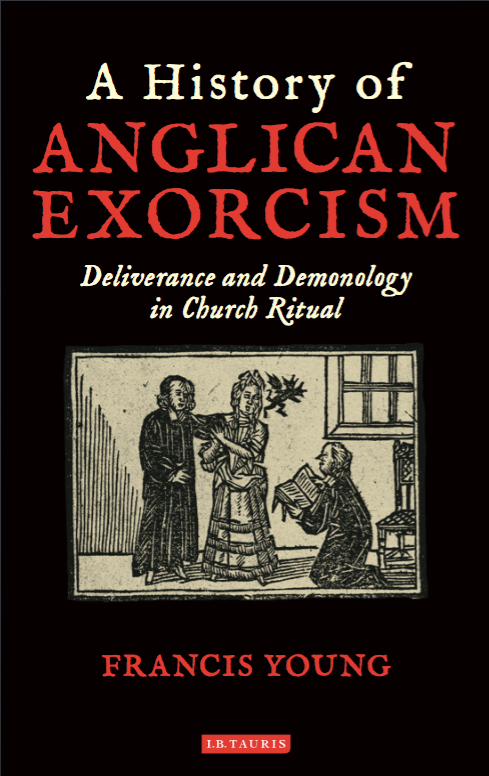 Today is publication day for my new book A History of Anglican Exorcism: Deliverance and Demonology in Church Ritual. The book is the first to tell the story of exorcism in the Church of England from the Reformation in the sixteenth century to the present day. Today, the Church of England is a major provider of ‘deliverance ministry’, with most dioceses appointing a ‘deliverance advisor’ (or advisers) whose task is to deal with requests for exorcism. Such requests range from house blessings to rid the inhabitants from a slight sense of unease to full-blown exorcism of a person claiming to be possessed by the devil. The contemporary church takes pains to emphasise the extreme rarity of ‘major exorcism’ (direct imperative adjuration of demons in possession of a person’s body), but the legitimacy of the practice has been acknowledged since Archbishop Donald Coggan presented a very sketchy set of guidelines for exorcism to General Synod in 1975.

The history of exorcism in Anglicanism is especially intriguing because, before the 1970s, the Church of England generally rejected the practice – to the extent that disbelief in demonic possession and exorcism were almost defining features of what it meant to follow the Anglican via media. To a large extent, A History of Anglican Exorcism is an attempt to unravel the mystery of how the Church of England went from being a denomination that defined itself in opposition to demonology to a major provider of exorcism. In order to answer that question it was necessary to return to the sixteenth century, because it was in the 1560s and ’70s that clergy of the Church of England first began to exorcise, dividing opinion in the church. Eventually, by the end of Elizabeth’s reign, it was scepticism about exorcism that came to predominate among the bishops. This scepticism was not that of the Age of Enlightenment; it was politically and theologically rather than philosophically or scientifically motivated. Put simply, exorcism was a ministry that undermined the authority of the bishops because they had no real way to control it. Furthermore, exorcism was a rite closely associated with Catholicism at a time when the Church of England was keen to distance itself from its Catholic past. Accordingly, a canon of 1604 all outlawed exorcism in practice (even if it was not outlawed in theory), and for the next three centuries or more unanimity more or less completely prevailed regarding possession and exorcism in the Church of England. Although few clergy were prepared to deny the reality of demonic possession as described in the Bible, most denied that such things occurred in the present, and denounced as charlatans those who claimed to be able to relieve the sufferings of the allegedly possessed.

Cracks in the Church of England’s united front against exorcism first began to emerge in the late nineteenth century, owing to the church’s extensive involvement in colonial missions. As early as 1877, the Archbishop of Canterbury authorised an exorcism outside England, and the idea that the devil might be more active in less ‘civilised’ territories began to gain credence. The arrival of Spiritualism in England in the 1850s stimulated renewed debate about demonology, while the burgeoning ‘science’ of parapsychology gave clergy a vocabulary in which they could talk about the unexplained without seeming credulous. Slowly but surely, the old Anglican taboo against exorcism broke down, but the revival of exorcism was largely the work of one man, Gilbert Shaw (1886-1967). Shaw performed his first exorcism of a place in 1926 and his first exorcism of a possessed person in 1942. By the 1950s he was the Church of England’s go-to expert on demonology and exorcism. In 1972 Shaw’s protegé Max Petitpierre was responsible for authoring the first report (by the Bishop of Exeter) to call for the systematic implementation of a ministry of exorcism in the church.

In spite of the fact that the Church of England’s newfound enthusiasm for exorcism contributed to a gruesome murder in 1974, in 1975 the House of Bishops confirmed the rite’s newly official status, although the regulation of exorcism was left to individual bishops. To this day, exorcism is not a ministry governed by canon law, although its official status is implicit from the fact that documents formally approved by General Synod mention the practice. As remarkable as the Church of England’s rapid acceptance of exorcism is the demise of the church’s traditional attitude of scepticism. After an unsuccessful attempt by a group of liberal theologians to prevent Archbishop Coggan’s formal endorsement of exorcism in 1975, the campaign to abolish exorcism in the Church of England largely ground to a halt. However, it is a key argument of the book that the modern church’s emphasis on safeguarding raises troubling questions about the tenability of exorcism as a ministry of the contemporary Church of England.

Today the East Anglian Catholic History Society (the diocesan historical society of the Diocese of East Anglia) held its third Annual General Meeting in the chapel of Oxburgh Hall, by the kind invitation of Sir Henry and Lady Bedingfeld. Prof. John Morrill, Chairman of the Society, shared the sad news of the recent death of Dr John Ashdown-Hill, who was a member of the Society and delivered the talk at last year’s AGM. I was re-elected Secretary of the Society, while Prof. Morrill was re-elected Chairman. A new committee was elected, with one new member. I gave the Society an update on the search for the body of St Edmund. After the AGM, John Saunders (Chairman of St Edmund’s Parish History Group, Bury St Edmunds), spoke about the challenges of setting up a parish history group, and told the story of the parish history group at St Edmund, King and Martyr, Bury St Edmunds, which has accomplished an immense amount of work since its establishment in 2006.