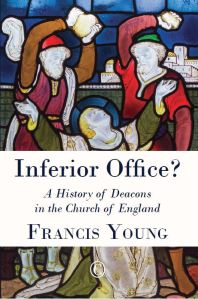 The front cover for my book Inferior Office? A History of Deacons in the Church of England, to be published on 30 April by James Clarke & Co., has just been released along with this description of the book:

In spite of the centrality of the threefold orders of bishop, priest and deacon to Anglicanism, deacons have been virtually invisible in the contemporary Church of England. Inferior Office? is the first complete history of this neglected portion of the clergy, tracing the church’s changing theology of the diaconate from the Ordinal of 1550 to the present day. Francis Young skilfully overturns the widely held belief that before the twentieth century, the diaconate was merely a brief and nominal period of probation for priests, revealing how it became an integral part of the Elizabethan defence of conformity and exploring the diverse range of ministries assumed by lifelong deacons in the seventeenth and eighteenth centuries. Lifelong deacons often belonged to a marginalised ‘lower class’ of the clergy that has since been forgotten, an oversight of considerable importance to the wider social history of the clergy that is corrected in this volume. 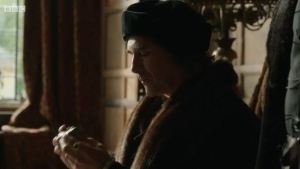 The nail-parings of St Edmund made a cameo appearance in this week’s episode of the BBC’s adaptation of Wolf Hall. In one scene, Thomas Cromwell is presented with a box and asked to guess what it is. He shakes the box, wrongly guesses the teeth of St Apollonia or the teeth of St Mary Magdalene’s comb, before being  told that it contains the nail-parings of St Edmund. This is a reference to a real letter sent to Cromwell on 4 November 1539 by John ap Rice, one of the Commissioners sent to dissolve the Abbey of St Edmund at Bury St Edmunds in Suffolk: ‘Amongest the reliques we fownde moche vanitie and supersticion – as the coles that St Lawrence was tosted withal; the paring of St Edmund’s naylls’.

Passing over the historical inaccuracy of the nail-parings making an appearance in 1536 (three years too early), the unwary viewer of Wolf Hall might draw the same conclusion Cromwell seems to – that the parings of St Edmund’s nails are a recent invention of the monks, in a cynical attempt to take more money from pilgrims. In fact, the parings of St Edmund’s nails may have been as old as the cult of St Edmund itself. Furthermore, far from being a new form of fraud invented by the monks, because of the nature of the cult of St Edmund, the nail-parings were one of the few ways in which pilgrims could get close to the body of the martyr.

The body of St Edmund was said to be incorrupt, and it was enclosed in an inner coffin inside the shrine and could not be seen or touched by the faithful, in contrast to some other bodies of saints. Indeed, St Edmund was supposed to take vengeance on those who touched his body unworthily, and the inviolability of the saint’s incorrupt body came to represent the inviolability of the political and ecclesiastical privileges enjoyed by the Abbey. However, pilgrims who came to the shrine wanted something more than just a view of the outside of the shrine, and the nail-parings of the saint offered something tangible to venerate, as well as a reminder of the early days of the saint’s cult in the ninth century.

According to the earliest account of the martyrdom of St Edmund by Abbo of Fleury, written in around 985, when the body of St Edmund was found by searchers in the woods where he had been martyred by the Danes, it was taken to the small wooden church of St Mary in the town of Beodricesworth (the future Bury St Edmunds). Here the body was attended by ‘a certain woman of blessed memory called Oswen, who … passed many years in succession near his consecrated tomb, absorbed in fastings and prayers’. Oswen ‘made it her constant practice to open the sepulchre of the blessed martyr year by year, at the anniversary of the Lord’s Supper [Maundy Thursday], and to trim and pare his hair and nails’. The fact that the saint’s hair and nails continued to grow was, of course, continuing evidence of his incorruption. According to Abbo, Oswen collected the nail-parings and stored them in a casket on the altar of the church.

Thomas Cromwell himself wilfully misunderstood the medieval cult of relics, infecting English culture with that same misunderstanding for centuries thereafter. Hilary Mantel and the producers of Wolf Hall seem to embrace and encourage that misunderstanding, as well as suggesting that Cromwell’s belief that most relics were fraudulent means of exploiting the credulous actually reflected reality. The Cromwell of Wolf Hall feels righteous outrage at the wicked practices of the monasteries – I naively believed that people stopped thinking the monasteries were dissolved for genuine corruption in the nineteenth century. It is as if the revisionist historiography of the Reformation never happened. I fear for a generation of people who will grow up believing that Wolf Hall represents genuine history, and that the monks really did deserve to have their monasteries dissolved. The Wolf Hall franchise is rapidly becoming an apologist for one of the nastiest men in English history and one of the nastiest crimes: the dissolution of the monasteries was the destruction of medieval England’s memory, an irreparable loss for which this country can never fully atone.

The dissolution of the Abbey of Bury St Edmunds and the fate of the relics of St Edmund is described in detail in my book Where is St Edmund? (2014).

This evening I spoke to the Ely and District Archaeological Society on the theme ‘The Bishop’s Palace at Ely in the sixteenth century: recovering the evidence’. The aim of the talk was to approach the Bishop’s Palace from an archaeological perspective, in an attempt to recover what the Palace might have been like when it was at its fullest extent in the sixteenth century, shortly after the construction of Bishop Goodrich’s Long Gallery in 1552. Although work on the Palace may have begun as early as 1486, an inventory of 1581 reveals that the Palace then contained 47 rooms, only 9 of which can be identified with parts of the Palace still standing today. Drawing on pictorial, cartographical and manuscript evidence, as well as the results of archaeological investigations in the Long Gallery in 1990 and 2013 by Hirst Conservation, I described what the Palace might have been like when the building was in use as a prison for Catholic recusants in the 1580s and ’90s, and suggested a conjectural groundplan.

The text of my talk is available here. 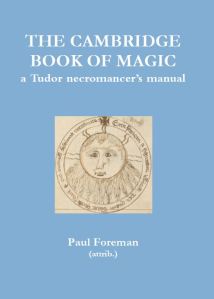 Paul Foreman was a sixteenth-century necromancer (ritual magician), who used the traditional prayers and liturgy of the pre-Reformation church in an effort to coerce and control angels and demons to do his bidding. Or, at the very least, he was an early owner of the manuscript that, in this edition, bears his name. The name ‘paul foreman’ appears close to front of the manuscript, apparently in the same hand as the rest of the treatise. The Cambridge Book of Magic is a collection of 91 ‘experiments’ in Latin and English, whose contents ranges from comparatively innocent tricks (making a silver coin look like a bronze one, for example) to more disturbing sorcery designed to torture one’s enemies, taking in some bizarre magical operations on the way (such as a procedure for making a magical bird by keeping flies in a jar). Although ritual invocations of angels and demons predominate, the text also includes naturalia such as the manipulation of astrological forces and the creation of monsters, and a strong strand of herbalism which recurs throughout the text. The Cambridge Book of Magic was probably written between 1536 and 1541, and certainly between 1532 and 1558, by a man learned in the liturgy and practice of the church. He was not a priest but he was probably in minor orders, and could have been an ex-monk making use of his magical learning in the local community after his ejection from a monastery in 1536 and 1539. This possibility is suggested by some of the contents of the text, as well as the fact that the manuscript originally came wrapped in a leaf from an illuminated medieval gradual, probably from a monastic context. The Cambridge Book of Magic gives a glimpse of the medieval tradition of ritual magic at the very cusp of the English Reformation, and as such it has the potential to advance our understanding of the relationship between religion and magic at this crucial period.

Reproduced by kind permission of Cambridge University Library, the original text of The Cambridge Book of Magic is printed alongside a complete translation of the Latin portions of the text, and a rendering of the English portions into contemporary English spelling. It is available to purchase here. 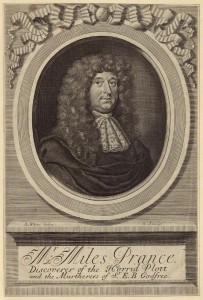 Last night I delivered a talk to the Ely Society at Ely Museum on the subject of ‘Catholics in Ely and the Fens’. I addressed the issue of the survival of Catholicism in the Fens, beginning with the remarkable story of Elizabeth Throckmorton, the Poor Clare Abbess of Denny Abbey who continued to live the religious life with two of her nuns at Coughton Court in Warwickshire, dying eleven years after the suppression of Denny. However, the evidence points on the whole to a complete extinction of Catholicism in the Fens, even though incidents in the late sixteenth century like the conversion of William Taylor of Ely (the future Benedictine Maurus Taylor) and the suspicious number of ‘popish ornaments’ still in St Mary’s church, Ely in 1570 point to a degree of Catholic sympathy and Church Papistry. However, it was the arrival of priests at Wisbech Castle that gave the first great impetus to the revival of Catholicism in the region, with the priests converting local inhabitants including the gaoler’s daughter. Priests escaped with the aid of local recusants, and local boys like William Arton made their way to the Continent to train as priests. Furthermore, the Bishop’s Palace in Ely was used as a prison for lay recusants between 1597 and 1588. After 1627, when the last prisoners departed from Wisbech, Catholicism in the Fens seems to have declined dramatically, although isolated families remained. Jeremy Hackluyt of Stretham converted and attempted to enter the English College, Rome in 1667, and the Prance family of March produced two priests and two nuns, as well as the Fens’ most notorious Catholic, Miles Prance. Miles trained as a goldsmith and invented the story that Sir Edmond Berry Godfrey had been murdered at the instigation of two Jesuits in 1678, thus setting in motion the train of events that led to the persecution of Catholics in the so-called ‘Popish Plot’. The final part of the talk dealt with Catholics who owned land in the Fens according to property registrations in 1715 and 1744. The last evidence we have of Catholics in the Fens is a letter from the chaplain at Sawston Hall in 1791 describing a journey he made into north Cambridgeshire to minister to scattered Catholics. But when the first priests arrived in Wisbech in 1840 to establish a Catholic congregation, they were essentially planting the faith anew.

The text of my talk can be downloaded here.