On today’s ‘Spooky Suffolk’ segment on BBC Radio Suffolk I spoke to presenter James Hazell about some of the supernatural associations of Sutton Hoo, which is in the news this week owing to the release of Netflix film The Dig, a dramatisation of the novel by John Preston about the discovery of the ship burial in Sutton Hoo’s Mound 1. You can listen to my interview here from time signature 2:16:00. 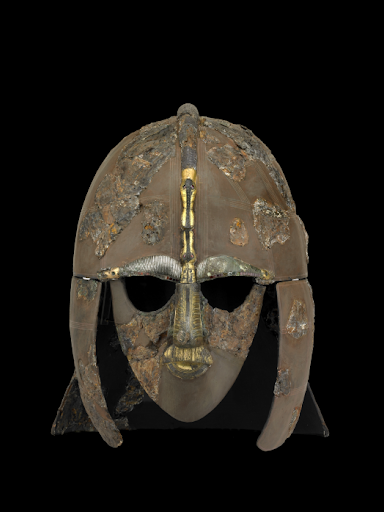 Perhaps the best known supernatural story about Sutton Hoo is Edith Pretty’s claim that she saw an armed warrior standing on top of Mound 1 long before the excavation took place – a vision that seems to have arisen from her practice of Spiritualism. However, Sutton Hoo’s supernatural associations reach much further back into the past. The burial of the warrior king in Mound 1 itself has certain connotations of magic. The purse-lid, in particular, depicting a man between beasts has been interpreted as an expression of some sort of shamanic ritual in Germanic religion, in which a human shaman travelled into the spirit world in animal form.

Whatever the enigmatic beliefs of the warrior of Mound 1 and his society – which was already in contact with and shifting towards Christianity – within decades Sutton Hoo had become a cursed place of execution and burial for criminals; a gallows was set up and the bodies of the condemned were decapitated and mutilated before being buried among the heathen burial mounds, which were now associated with an evil pagan past. The association between barrows and evil supernatural beings is hinted at in the Old English charm ‘against sudden stitch’ (elf-shot) known as Wið færstice, which refers to ‘mighty women’ who ride over a burial mound and appear to be elves or witches.

Sutton Hoo has been persistently linked in folklore with the treasure-hunting activities of the 16th-century magician John Dee, but in my research into Dee’s treasure-hunting I found no evidence he ever visited the site or expressed an interest in it. Instead, Martin Carver has suggested that the 16th-century ‘hill-digging’ at Sutton Hoo – which narrowly missed the ship burial in Mound 1 – was orchestrated by William Smyth of Clopton, who (in common with most treasure-hunters of the period) made use of necromancy in an effort to discover buried treasure.

This afternoon I was once again interviewed by James Hazell for BBC Radio Suffolk’s ‘Spooky Suffolk’ segment, this week focussing on Suffolk’s abandoned settlements. Although Dunwich is the most famous of these, a large port town abandoned to the sea in the Middle Ages, other settlements have been absorbed by the expansion of towns such as Ipswich, Bury St Edmunds and Lowestoft (and their names forgotten), while other settlements never recovered their population after the Black Death and were abandoned – such as Alston St John, Chilton and Wordwell. Still more villages ceased to exist or were moved from their original location as a result of the enclosure and landscaping of parkland in the 18th century, such as Fornham St Genevieve, Ickworth and Culford. You can listen to me talking about Suffolk’s lost settlements here at time signature 2:15:30.

This evening I delivered an online talk for Wiltshire Museum on the theme of ‘History in Prehistory: Interpreting the Prehistoric Landscape in Medieval and Early Modern England’, which examined the evidence for pre-archaeological interpretations of prehistoric landscape features from the early Middle Ages to the advent of antiquarianism in the 16th century.

Medieval and early modern people lived in a rural England whose landscape and boundaries were still determined, to a remarkable degree, by their Neolithic, Bronze Age and Iron Age predecessors. In many parts of the country, people lived in the shadow of artificial landscape features created by prehistoric people which served as landmarks and focuses of local folklore. The talk examined how medieval and early modern people approached the prehistoric past in the landscape before the advent of antiquarianism and archaeology, and how their folklore, religious beliefs and understanding of customary traditions affected their interpretation of prehistoric features.

In today’s ‘Spooky Suffolk’ segment on BBC Radio Suffolk I spoke to James Hazell about Suffolk’s Plough Monday traditions, from cross-dressing to plough blessing and a strange charm involving a ploughshare and a bull’s penis… You can listen again here (at time signature 2:14:20).