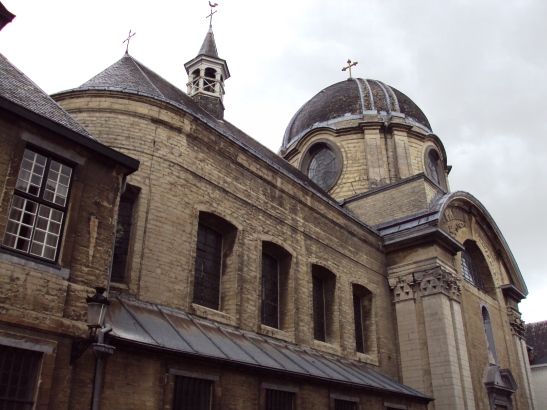 The conventual church from the Carmerstraat

On Tuesday 18 August I had my first opportunity to pay a visit the English Convent in Bruges, Belgium. The Priory of Nazareth of the Augustinian Canonesses Regular of St John Lateran, to give it its full title, was founded from St Monica’s Priory in Louvain in 1629 and, with the exception of the colleges for training secular priests at Rome and Valladolid, it is the only English Catholic religious house in Continental Europe, the sole survivor of dozens of communities founded in the sixteenth and seventeenth centuries for the sons and daughters of recusants. Virtually all of the communities on the Continent went into ‘exile’ in England in the 1790s, fleeing the French Revolutionary armies (a notable exception was the Benedictine Priory of St Edmund at Douai in France, which was forced out by anti-Catholic laws as late as 1904 and is now located at Woolhampton, Berkshire). The Canonesses of the English Convent were no exception; what was exceptional was that the Bruges community, led by their redoubtable Prioress Mother Mary Augustina More (1732-1807) returned to the Low Countries after the Peace of Amiens in 1802 and have been there ever since. 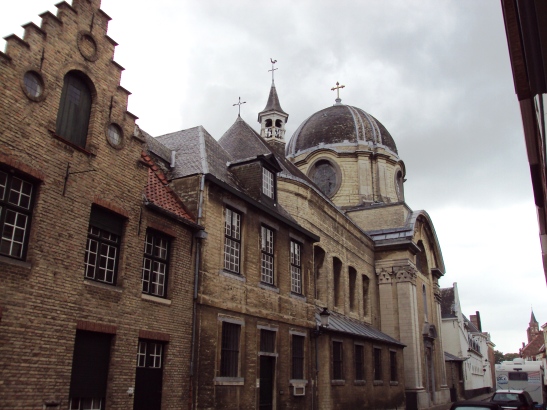 I first became interested in the English Convent many years ago when I was a member of the Community of Reconciliation at Hengrave Hall (1998-99), since it was at Hengrave that the Canonesses spent their exile between 1794 and 1802. Sir Thomas Rookwood Gage, 5th Baronet offered the community Hengrave for a much reduced rent. Thomas had inherited Hengrave from a cousin in 1767, but the family already had a seat at Coldham Hall, so Hengrave became the home of Sir Thomas Rookwood Gage’s son in the 1770s. However, after a scheme to modernise the house in 1775 ran out of money, the house stood empty for years and it was in a deplorable condition when the Canonesses took over in 1794. Most remarkably, the Canonesses not only continued their community life (although they were obliged to abandon their religious habit) but also re-established their school within a few weeks of moving to Hengrave. Thereafter they established positive relationships with the local community and even the Church of England vicar of Flempton-cum-Hengrave, who turned a blind eye to Catholic interments of sisters who died in Hengrave churchyard by their chaplain, Fr Andrew Oliver. Indeed, until the early twentieth century the sisters’ tombstones were still visible but they had vanished by the time I was at Hengrave. 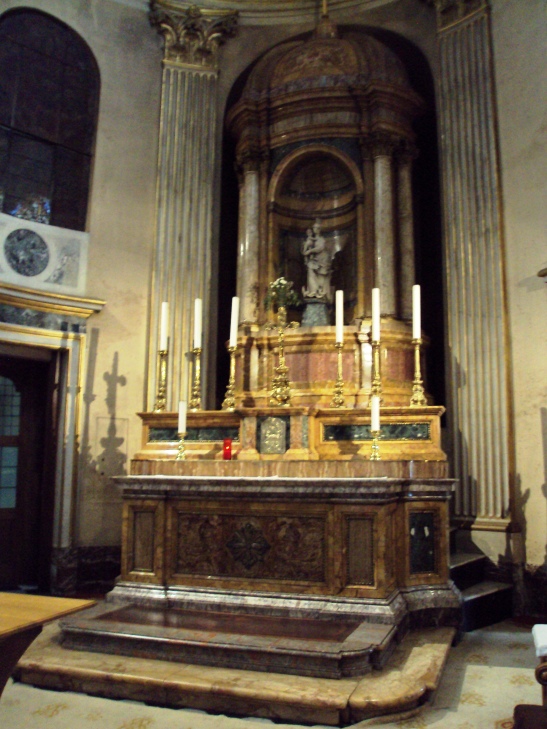 The sanctuary and high altar

Other reminders of the Canonesses did remain, such as the ‘Nuns’ Walk’ (a raised bank on the west side of the West Garden, with a crucifix at the south end) and the ‘Nuns’ Gallery’ (the gallery above the sixteenth-century Oratory) as well as a terrifying charcoal portrait of Mother Mary More in the sacristy next to the Oratory and, in the archives, a single letter from Mother More herself. Ironically, in spite of the fact that the Canonesses returned to Bruges in 1802, Hengrave became the home of a religious community anyway, the Religious of the Assumption who purchased the Hall in 1952 and occupied it until 2006. Like the Canonesses, the Assumptionists followed the Rule of St Augustine and, until 1974, their primary work was education. Furthermore, like the Canonesses they were emphatically not nuns in the strict sense of the term, since they did not lead an entirely enclosed life. 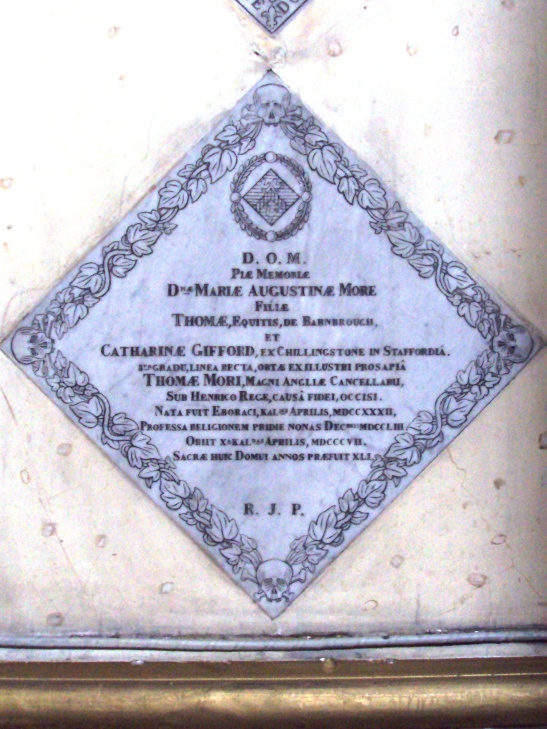 My interest in the exile of the Canonesses at Hengrave led to my first article, published in the May 2004 number of Recusant History, ‘Mother Mary More and the Exile of the Augustinian Canonesses of Bruges in England: 1794-1802’. The article attempted to improve upon the very thorough work of Catherine Durrant in her book A Link between Flemish Mystics and English Martyrs (1925) by examining new evidence, such as the letter from Mother More in Hengrave’s own archives (I presume – and hope – it has now found its way into the provincial archives of the Assumptionists) and some items in the Hengrave Manuscripts in Cambridge University Library. However, I had no opportunity to visit Bruges to consult the actual archives there and I was heavily reliant on Durrant. 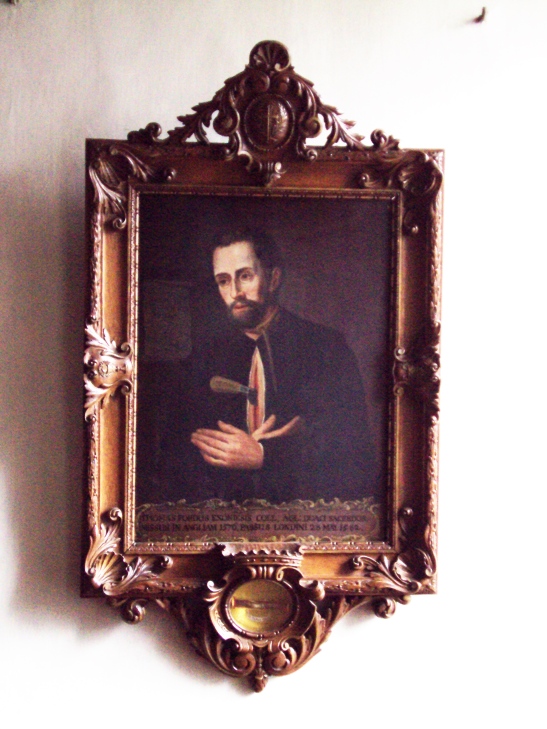 The English Convent is located on the north side of the Carmerstraat, a long road that leads from one of the inner canals in the centre of Bruges to the very edge of the old city, which is ringed by raised banks with windmills on them (the windmill at the end of the Carmerstraat, the Sint-Janshuys windmolen, is one of the few still operating). The location is far from central, which is what one would expect of a plot of ground granted to a few English exiles. The conventual church is the only domed structure in the city, and was built with its south side right against the Carmerstraat; the main entrance to the convent is a little courtyard located to the east of the church which leads to a parlour and, beyond a grille, the remainder of the convent. I am very grateful to Sr Mary Augustine for giving me a very informative guided tour of the church. 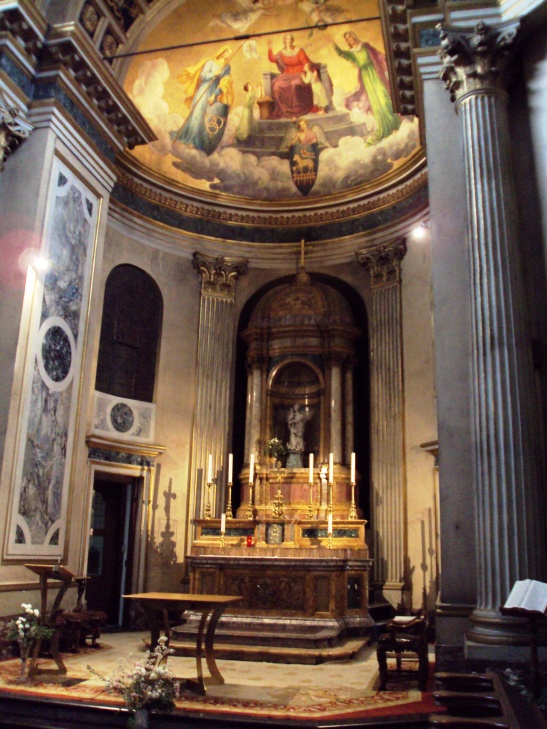 The convent church is entered via a small ante-chapel and a set of steps that lead up to the semicircular apse at the east end of the church, so that the first thing the visitor sees is the Carrara marble altar donated by the Countess of Nithsdale in gratitude for her husband’s successful escape from the Tower of London (his wife famously assisted his escape by dressing him as her lady’s maid). The apse above the altar and dome feature paintings which I judged to be of the first half of the nineteenth century in date, and indeed most of the interior features of the church would seem to date from after the French Revolution. Although one of the Canonesses, Sr Olivia Darell, stayed behind in Bruges throughout the Revolutionary period, she was unable to prevent the looting of the church. When the nuns returned in 1802 they had the entrance from the street (which was in the south wall of the main body of the church) sealed. 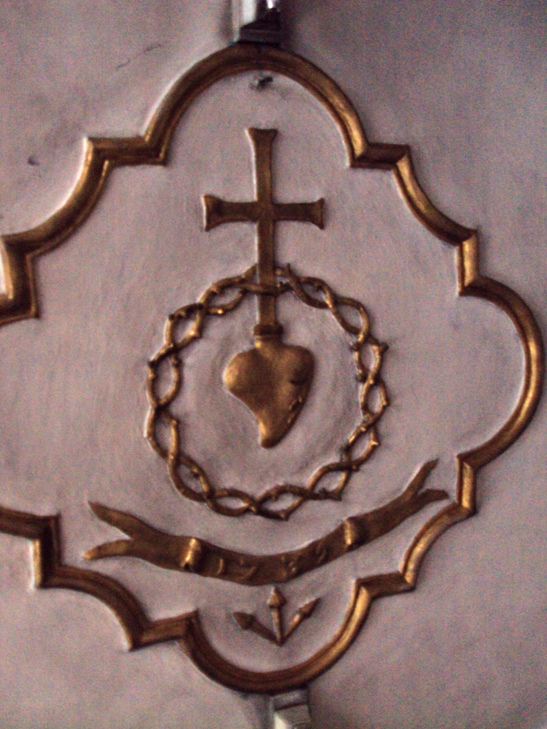 Original plaster decoration of the western antechapel, featuring the date 1739

Prior to the Revolution, the convent was not only a religious community but also a church for the exiled Catholic community in Bruges. The present church was built in 1739 and paid for by William Herbert, Marquess (or Duke in the Jacobite peerage) of Powys, but the only interior decoration I was able to identify with certainty as dating from that era was the plaster ceiling in the antechapel at the west end of the church, which features a heart with a cross encircled by a crown of thorns (the emblem of the Order of St Augustine) and the date 1739. The black and white floor, with its impressive star design, may also be original as far as I know. The statue of Our Lady above the altar was, according to Sr Mary Augustine, left on the steps of the convent ‘about a hundred years ago’; from this comment I would guess that it was something looted by the French Revolutionaries and subsequently returned to a church by someone who felt guilty about the crime of sacrilege. The memorial tablets in the church are all post-Revolutionary, including one to Mother More in the southwest corner of the main body of the church. The stalls of the Canonesses are now located in this area, having been moved down from closer to the high altar after Vatican II. 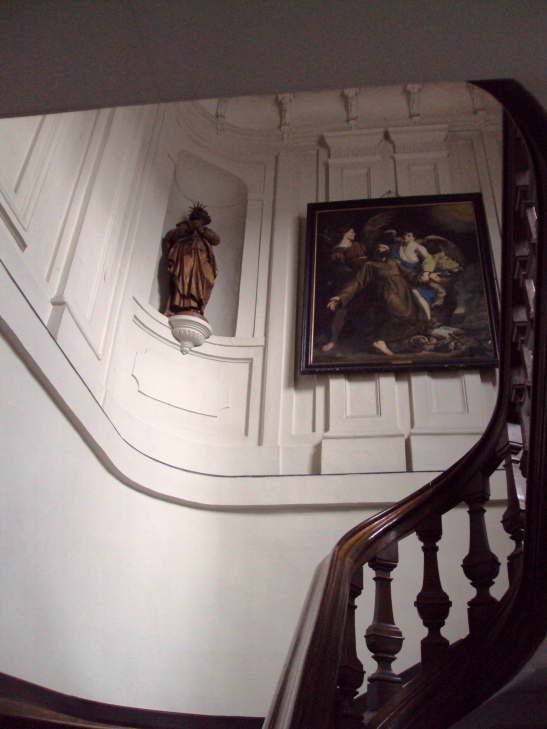 Main stairs of the convent

In the western antechapel, separated by a grille from the rest of the space, is usually located a much-venerated portrait of St Thomas More which was given to Mother More, who was the saint’s last direct descendent. The portrait is also venerated because Margaret Clement, the founder of St Monica’s, Louvain (Bruges’ mother house) was More’s adopted daughter. However, the painting was not only display when I visited, and I only saw the painting of Blessed Thomas Ford (d. 1582), a rather obscure martyr. Sr Mary Augustine was kind enough to allow me to see the chapterhouse, the statues of Ss Peter and Paul on the main stairs, part of the cloister (featuring a memorial tablet to Sr Mary Augustina Bedingfield) and a glimpse of the monastic garden, where there are stone tablets on the outside of the building with the names of all the nuns. 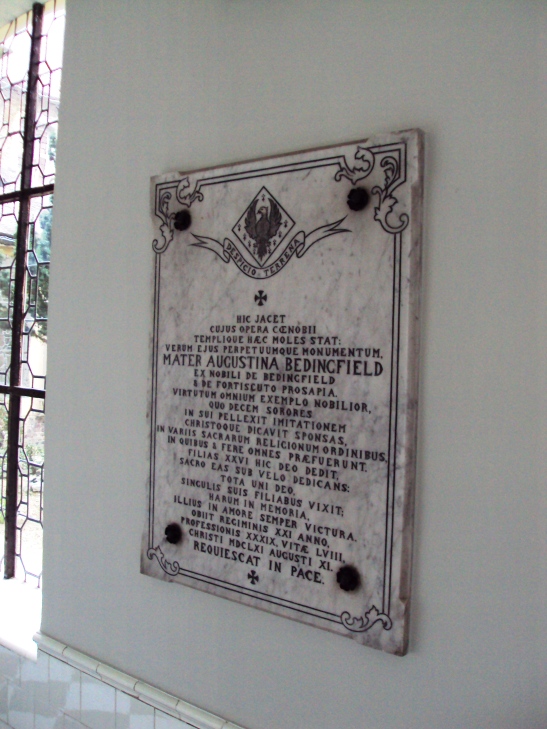 In the next street over from the English Convent in the Guido Gezelle Museum, dedicated to the most famous Flemish poet who also happens to have been the chaplain of the English Convent in the late nineteenth century. A great Anglophile, Gezelle was responsible for the foundation of the Societé Archéologique de Bruges in the 1860s, which played a key role in preserving Bruges’ medieval architecture; he also seems to have been involved in a translation of the works of A. W. Pugin and thus introduced the same standards of Neo-Gothic architecture to the Low Countries as flourished in Victorian Britain. He was also a folklorist. Although I had heard of Gezelle before I had no idea of the true magnitude of his cultural achievement. 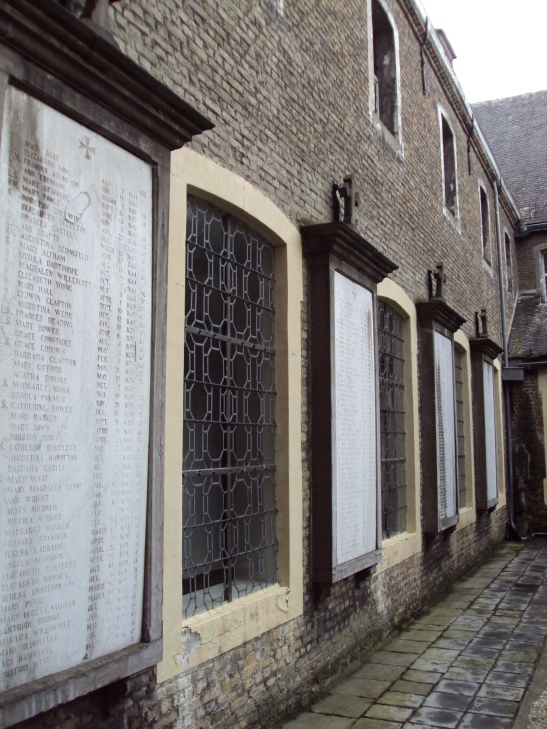 Part of the cloister and convent garden

The English Convent was a home-from-home for many English Catholics at key times of stress: the Civil War and Interregnum, the Popish Plot, the Revolution of 1688 and the Jacobite risings. East Anglian Catholic families were especially associated with Bruges, and there was once a huge and impressive memorial tablet, long vanished, to Elizabeth Rookwood (née Caldwell) who died in 1691 while living as a ‘boarder’ in or near the convent; she and her husband had been forced to flee Bury St Edmunds in 1688. Another Elizabeth Rookwood (1684-1759), the only daughter of Thomas Rookwood (1658-1726) spent her formative years in the convent while her father struggled to obtain permission to return legally from exile in Bruges, where he lived from 1694 until 1704. The Bedingfield family contributed numerous daughters to the community, and it was on account of Sr Mary Stanislaus Gage, a daughter of Sir William Gage, 2nd Baronet, that the 6th Baronet looked favourably on the exiled community and allowed them the use of Hengrave. 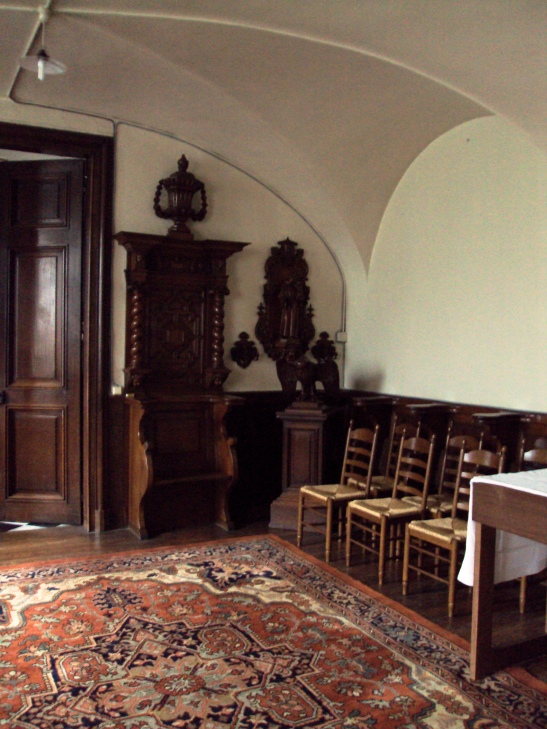 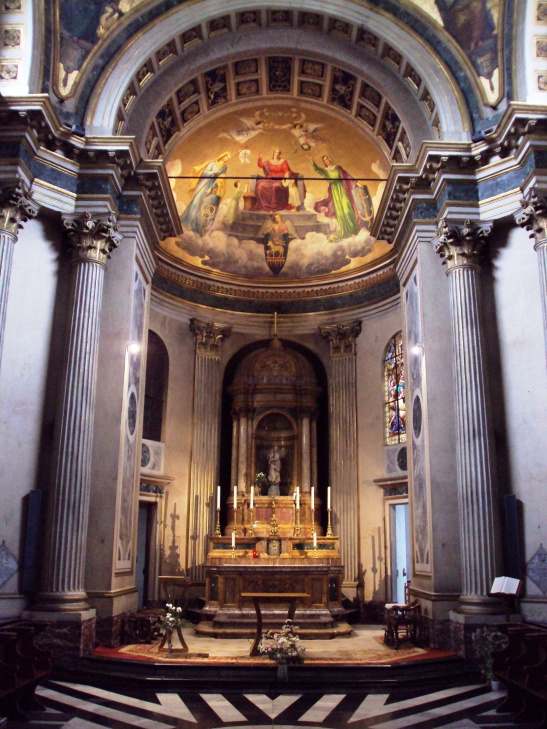 Sr Mary Augustine is now the only English member of the community, the remainder of whom are French or Belgian. However, they are extremely aware of their history and the English Convent will always remain, like the Venerable English College in Rome, a tiny corner of England in a foreign land. 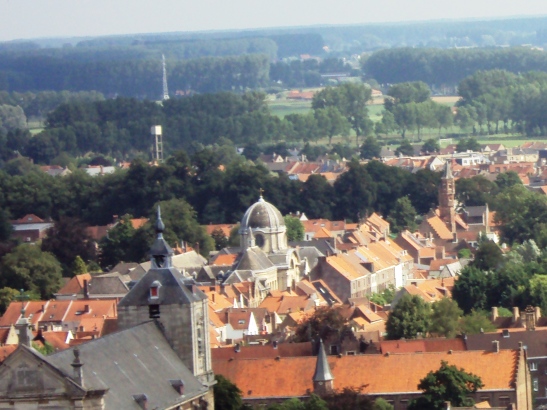 The English Convent viewed in the distance from the Belfort 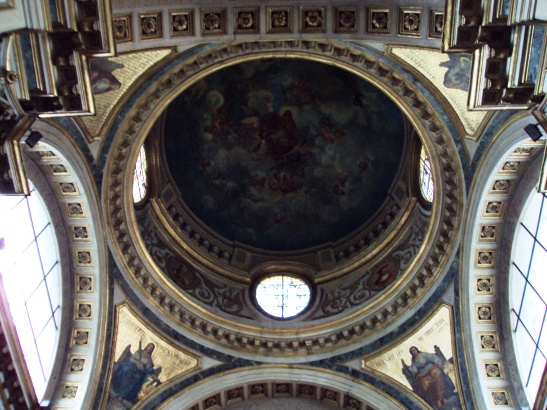 Interior of the dome

13 comments on “The English Convent, Bruges”