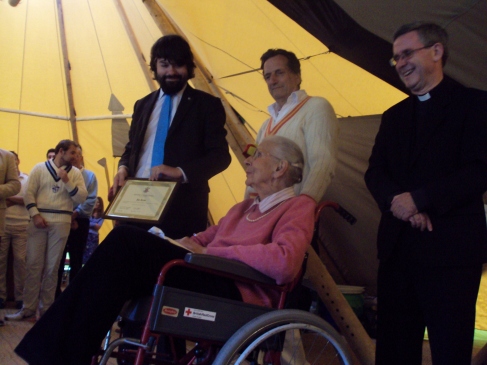 Joy Rowe, who died on 7 September 2020 at the age of 93, was a key figure in the study of the religious history of early modern East Anglia, and for many years a leading member of both the Catholic Record Society and the Suffolk Records Society. It would be no exaggeration to say that Joy Rowe revolutionised our historical understanding of the place of religious minorities in early modern East Anglia, while she pioneered the study of East Anglian Catholicism as early as the 1950s – long before the recent expansion of interest in the study of the English Catholic community at a local level. The body of work she left behind remains indispensable to the study of Elizabethan Catholicism, and Joy Rowe ought to be considered a largely unsung hero of the ‘revisionist’ movement within the historiography of English Catholicism in the 1980s and ’90s, alongside such figures as Eamon Duffy, Christopher Haigh, Michael Questier, Alexandra Walsham, and Nicholas Tyacke. Perhaps because she never produced a major monograph, Joy Rowe’s work has tended to be consigned to footnotes – but every article she wrote was pioneering and extraordinary.

I first got to know Joy Rowe in the late 1990s when I was still studying for my A Levels, and researching the Suffolk composer John Wilbye for a History project. Joy encouraged my research, generously shared her insights, and urged me to consult the primary sources – advice for which I have always been grateful. As a consequence, I first came into contact with the Hengrave Manuscripts in Cambridge University Library and the Suffolk Record Office in Bury St Edmunds, which would form the basis of much of my later work. It was fitting that my interest in Hengrave Hall led me to Joy Rowe, since Joy taught History there in the 1950s when it was a convent school run by the Sisters of the Assumption. Her first major article, published in 1958, focussed on the medieval monastic hospitals of Bury St Edmunds, but in 1959 Joy turned to early modern history with the publication of a slim but groundbreaking pamphlet, The Story of Catholic Bury St Edmunds.

Although later reprinted in an expanded form in the 1980s (to cover the history of the Catholic mission at Coldham and Lawshall as well), Joy Rowe’s work was pioneering in the 1950s because it broke away from the then predominant view of post-Reformation Catholic history as the story of recusant gentry families and the priests who served them. Joy drew on the surviving 18th-century mission register of the Jesuit founder of the Catholic church in Bury St Edmunds, John Gage, to analyse the Catholic community in a town – of all social classes, and not just the gentry. 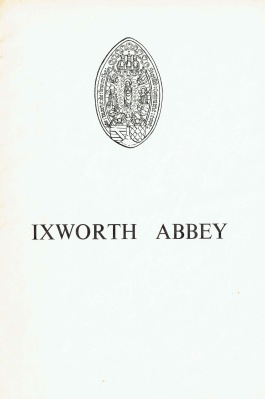 In 1962 the Rowe family moved into Ixworth Abbey, a house constructed from the ruins of Ixworth Priory, a priory of Augustinian canons founded in the 12th century. Joy published a brief pamphlet on Ixworth that remains to this day the most recent research on this little studied religious house. Joy shared her historical interests with the parish priest of Bury St Edmunds, Fr Bryan Houghton, who in the 1960s embarked on a search for the relics of St Edmund in the belief that they reposed at the Basilica of Saint-Sernin in Toulouse. However, Fr Houghton’s departure from Bury in 1969 was not followed by similar enthusiasm for the history of the parish – to the extent that John Gage’s precious mission register ended up in a wastepaper basket from which Joy Rowe had to rescue it. For several decades the register remained in her possession – since she was unwilling to trust the church to look after it – before she eventually deposited it with the Suffolk Record Office.

In 1960 Joy Rowe began a scholarly collaboration with Patrick McGrath that would last for three decades and produce five articles. The first article focussed on the intriguing Sir Thomas Cornwallis, an Elizabethan Catholic notable for his tactical strategies of survival and alliance of convenience with the Protestant Bishop of Norwich, Edmund Freke, against the increasingly influential Puritans. This early article foreshadowed two of the major themes in revisionist historiography of the English Catholic community in subsequent decades, which emphasised the nuanced nature of Catholic adherence (beyond outright recusancy) and the extent to which Catholics continued to exert local influence rather than being merely persecuted martyrs. Subsequent articles co-authored with McGrath examined Marian priests in the reign of Elizabeth, the early seminary priests, harbourers of priests, and imprisoned Catholics in Elizabeth’s reign.

In the 1990s Joy Rowe’s historical interests expanded beyond Catholicism to include other religious minorities in early modern Suffolk, while her researches into the Catholic community expanded beyond the reign of Elizabeth to include the 17th and 18th centuries. Joy’s work on the 1767 Census of Papists once again broke new ground, at a time when there was very little interest in the 18th-century Catholic community. Joy Rowe showed a willingness to grapple with the complexity of urban and rural Catholic communities that was paralleled by few other historians at the time. In 2004 she was invited to contribute no fewer than eight articles to the new Oxford Dictionary of National Biography.

My own collaboration with Joy Rowe began in earnest in 2009, when I began work on my book The Gages of Hengrave and Suffolk Catholicism, 1640–1767. The book was, to an extent, one that Joy herself had long wanted to write, and she generously shared her insights and kindly permitted me to reproduce extracts from John Gage’s mission register. Then, in 2016, Joy kindly acted as general editor for my edition of the Rookwood Family Papers, 1606–1761 for the Suffolk Records Society. In that year Joy and I also collaborated on a chapter on Elizabethan Catholicism in the volume I edited to mark the fortieth anniversary of the Roman Catholic Diocese of East Anglia, Catholic East Anglia. Sadly, Joy was not able to be present in person to deliver her paper on the 18th-century Bacton mission at the ‘Catholic East Anglia’ conference at the Cathedral of St John the Baptist in May 2016, but in September I was able to help present Joy with a Diocesan Medal (in recognition of her contributions to Catholic history) at her 90th birthday party at Ixworth Abbey.

Joy Rowe was an exceptionally gifted historian whose work, even today, has not yet been exploited to its fullest extent to transform our perceptions of Catholicism in post-Reformation East Anglia and beyond. Joy’s work was characterised by her unfailing willingness to return to the primary sources, by her nuanced and insightful interpretation of the evidence, and by her boldness in advancing new approaches to material that others sometimes thought unworthy of attention. My priorities as a historian were shaped by Joy Rowe in so many ways, and I feel convinced that her contribution will long survive her.

Joy Rowe and Patrick McGrath, ‘The Recusancy of Sir Thomas Cornwallis’, Proceedings of the Suffolk Institute of Archaeology and History 28 (1960), pp. 226–71

Joy Rowe and Patrick McGrath, ‘The Imprisonment of Catholics for Religion under Elizabeth I’, Recusant History 20:4 (1991): 415–35

Joy Rowe, ‘The 1767 Census of Papists in the Diocese of Norwich: The Social Composition of the Roman Catholic Community’ in David Chadd (ed.), Religious Dissent in East Anglia III (Norwich: University of East Anglia, 1996), pp. 187–234

This entry was posted on September 16, 2020 by Francis Young.