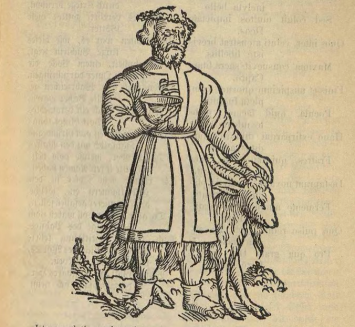 I have just signed a contract with Arc Humanities Press for a new book, Pagans in the Early Modern Baltic: Sixteenth-century Ethnographic Accounts of Baltic Paganism. The book will be an edition and translation of the key early modern Latin sources (primarily by Polish and Italian authors) that describe ongoing pagan beliefs and practices in sixteenth-century Lithuania and Prussia. The book will make the key sources on Baltic pagan religion available in English for the first time.

The Baltic peoples of Prussia (Lithuania Minor, today’s Kaliningrad Oblast) and Lithuania were almost unique among European nations in retaining their ancestral pre-Christian religion until the late Middle Ages. While the conversion of the Prussians was the justification for the Baltic Crusades, which brought Prussia and Latvia under the rule of German military orders, the Grand Duchy of Lithuania not only remained officially pagan but also expanded into a vast Central European empire. Although Lithuania formally converted to Christianity between 1387 and 1413, according to some accounts the nation was not fully Christianised until the eighteenth century. 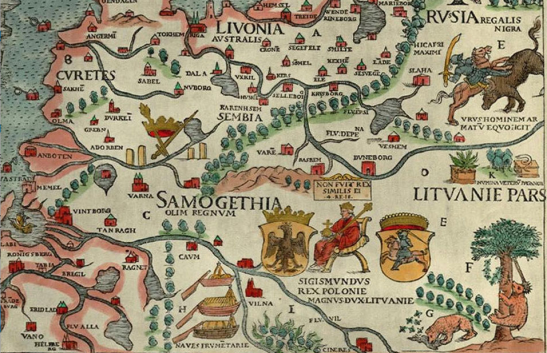 Map of Samogitia and Lithuania (1539)

In sixteenth-century Europe, the existence of semi-pagan Lithuania was a puzzle to many scholars in the Polish-Lithuanian Commonwealth, who tried to understand what the Lithuanians believed in an effort to convert them properly to Christianity – an effort hampered by the newly erupted religious divisions of the Reformation within Poland-Lithuania itself. Indeed, the intellectual challenge posed by the continued existence of paganism in the Baltic is comparable to the challenge of Spain’s discovery of indigenous peoples in the New World with no knowledge of the Christian faith. Scholars were simultaneously fascinated by the alien nature of Baltic religion and condemnatory of the ignorance of pagan idolatry; yet the detail in which early modern authors attempted to describe Baltic paganism suggests that curiosity at least partially overcame religious bigotry in the milieu of Polish Renaissance Humanism. These texts represent the birth of a new form of early modern ethnography that was less concerned with condemning the heinous superstitions of pagans than with engaging with pre-Christian religion as a manifestation of human culture.

The reconstructed Samogitian pagan shrine at Šventoji (via Wikipedia)

While early accounts of the peoples of the New World have long been recognised as central to the development of the discipline of ethnography, Christian European engagement with the pagans of the Baltic has been overlooked in English-speaking scholarship. Yet it is a mistake to see the persistence of paganism in Lithuania as significant only within the context of Central European history. Lithuania, and subsequently the Polish-Lithuanian Commonwealth, was an empire of huge geopolitical and cultural importance in Europe as a whole. Furthermore, the pagan religion of the Balts is the only ancestral religion of any European people to be described in any level of detail in the modern era. Much light can be shed on the contested subject of pagan cultural and religious survivals, often debated in medieval studies, when we examine a culture where paganism actually did survive.

Featuring translations of ethnographic texts by Martynas Mažvydas, Michael the Lithuanian, Jan Malecki, Alessandro Guagnini and Jan Łasicki (amongst others), Pagans in the Early Modern Baltic seeks to unpick truth from exaggeration in early modern accounts of Baltic paganism. To what extent were the Lithuanians and Prussians really still ‘pagan’ in the sixteenth century, and to what extent can accounts by Catholic and Lutheran commentators be considered reliable? The book grapples with questions of Christianisation, the definition of ‘paganism’, and the nature of the Baltic pantheon while arguing that ongoing doubt about the sincerity of the Lithuanians’ Christianity was a thorn in the side of an already fractured early modern Christendom.

One comment on “Contract signed with Arc Humanities Press: Pagans in the Early Modern Baltic”