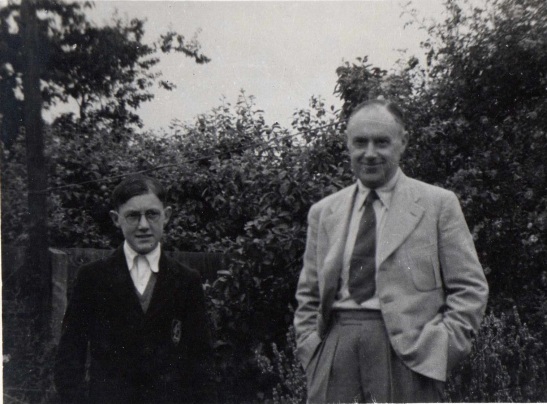 A young Peter Payne (left) with his father George, 1930s

Today I delivered the address at the funeral of my relative Peter Payne, who died aged 95 on 28 October. Peter was one of the leading computer scientists of the post-War era, and in my address I attempted to do justice to his scientific achievements.

Peter Payne was a man who changed the world we live in. It is not often that this can truly be said of someone; but in Peter’s case it really is true. Peter was such a modest man that he barely ever talked about his achievements, still less boasted of them; indeed, it was not really until last year, when I bumped into one of his former colleagues, that I really started to appreciate the significance of what Peter did. As a child I was always fascinated by the things Peter could do with the rather basic home computers then available; on one occasion, I remember that he managed to scan a drawing I had made of a cartoon mouse and turn it into a brief animation.

Peter was not born into the Young family, and yet he was grafted into the Youngs when his father George married Flo, my great aunt. George Payne died in 1950, but Peter often said that his father was even more talented than he was – an engineering foreman at W.H. Allen so skilled that he was the only worker permitted to use the most sophisticated cutting machines. Peter inherited his father’s gift for working with technology – but unlike his father, Peter had the opportunity to receive a higher education, and became one of the leading computer programmers of the post-War era.

Peter was always a man ahead of his time, and this was why I always enjoyed visiting him. He seemed to see further than the rest of us, and his was an intellect focussed on the horizon of the future. Indeed, while the work of many researchers soon gets supplanted and fades into insignificance, Peter’s pioneering programming for the design and manufacture of three-dimensional objects is much more important now than it was in the 1960s. It will be still more important in years to come. 3D printing technology, the technology of the future, is dependent on programming developed by Peter Payne for W.H. Allen, British Airways Corporation, Clark’s Shoes and others. In 1972, Peter was the first person in the world to demonstrate that a computer program could be used to cut a three-dimensional object. That moment was, in effect, the birth of all 3D computer-aided manufacturing, including 3D printing.

In 2018 I met a gentleman called Ernest Warman who worked with Peter in the ’60s and ’70s, and remembered him as both a legend and a visionary genius of computer-aided design. Ernie remembers Peter working through the night to design the nose-cone of the BAC111 aeroplane, a type of short-haul jet that remained in service from the 1960s until the retirement of the last plane as recently as May of this year. Peter showed that he could accomplish in one night what would have taken a conventional team weeks to complete. On another occasion, Ernie remembered someone asking if a program could be developed to design shoes; Peter took off one of his own shoes there and then and used it to write a program that would create templates for shoes. There was no faffing about with Peter! He subsequently worked with Clark’s Shoes, developing a computer-controlled shoe last that is now on public display in the Whipple Museum of the History of Science in Cambridge. The programs he developed were probably used to create the shoes you are all wearing today. Believe it or not, even the humble snap-shut spectacle case was developed by Peter’s team.

Peter’s work bridged the worlds of engineering and academic research, and he worked both in Cambridge University’s Engineering Department and in the Mathematical Laboratory, the predecessor of today’s Department of Computer Science. The area in which Peter excelled was creating programmes that could deal with complex, curved 3D surfaces – something that, when Peter started, no-one thought a computer could do. But the more challenging the problem, the more eager Peter was to find a solution. Indeed, a preoccupation with the three-dimensional spilled into Peter’s hobby of stereoscopic photography, while his brilliant spatial sense was no doubt the secret of his gifted coaching in snooker.

The life of Peter John Payne is a reminder of how much a single modest and unassuming human being can contribute to the world – in ways that seem small at first, but in the perspective of history may be huge. The work of pioneers of computer science, of whom Peter was one, now dominates all our lives in ways they could not have imagined. Peter himself started to feel as early as the late 1990s that he no longer understood modern computers. But in truth we do not yet know the true significance of Peter’s work, as the technology made possible by his vision is still being invented. Peter was one of the last surviving pioneers of the first age of computing that followed the Second World War.

I don’t know why Peter was so modest about what he accomplished. Perhaps he felt that the credit should go to the team in which he worked, rather than to any one individual. But above all, I think Peter understood that it was his quiet work as a mentor – whether to young engineering students, to young snooker players, or to members of his own family – that mattered most. His kindness, his patience, and his ability to inspire inquiry have left a legacy that I think Peter would have considered just as important as his scientific contribution. Because Peter was always able to see more than one dimension.

This entry was posted on November 18, 2019 by Francis Young.