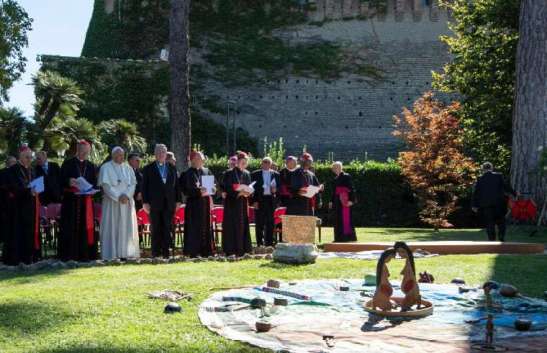 In the early hours of Monday 21 October two individuals removed the controversial ‘Pachamama’ statues that played a part in the opening of Pope Francis’ Amazon Synod from the church of Santa Maria Traspontina and threw them into the River Tiber. Footage of the event was widely shared and celebrated online by those who considered the Pachamama statues to be ‘pagan idols’ rather than the culturally specific symbols of life and fertility the Vatican asserts them to be. This act of iconoclasm is particularly striking because the destruction of images is not something we generally associate with the Catholic tradition, but there is in fact a long tradition of Catholics destroying religious images.

The extent to which the early church systematically destroyed pagan imagery after the adoption of Christianity as the official religion of the Roman Empire remains unclear. Pagan imagery and characters frequently co-existed alongside Christian themes in mosaics, ivory plaques and elsewhere, suggesting that a tradition of treating ‘pagan’ themes as mere cultural symbolism (after the manner of the Italian Renaissance) already existed in late antiquity. For all the thunders of the Church Fathers against idols, ordinary Christians seem to have tolerated a great deal of pagan imagery, perhaps because they understood the distinction between cultural symbolism and religious veneration. Imagery was also invested with new meanings, such as the peacock, the emblem of the goddess Juno, which became a symbol of the immortal soul. A few examples survive of pagan cult images re-purposed as statues of the saints, or even Christ himself. Yet it is impossible to discard the contemporary claims that destruction also occurred.

As the Christian church pressed north into pagan lands in the early Middle Ages, the problem of idols reared its head once more. Famously, Pope Gregory I wrote to Mellitus, one of the companions of Augustine, that he should destroy the idols in pagan temples in England and make use of the buildings as churches. Archaeological evidence, however, suggests that Gregory may simply have been ignorant of Anglo-Saxon paganism and was imposing his own cultural expectations of paganism on England – it is far from clear that Anglo-Saxon pagans even had cult images, let alone temples that were buildings suitable for use as churches.

From the fourteenth century onwards, when magic became once more an object of fear for the church, and there were a number of instances of church courts ordering the destruction of ‘images of devils’ found in the possession of suspected magicians. However, it was not until 1341 that European Catholics encountered an actual pagan idol, when Portuguese soldiers exploring the Canary Islands found a small statue inside a shrine belonging to the islands’ native Guanche people. The Portuguese did not destroy the statue, but rather took it back to Lisbon with them as a curiosity. The Guanches were encouraged to venerate the Virgin Mary in the places where they had previously engaged in pagan worship, and there seems to have been no systematic campaign of iconoclasm in the Canaries.

The demonization of pagan religion became a major issue once more after the arrival of Europeans in the New World. Spain’s claim to the New World was founded, in theory, on a duty of converting the native people to Christianity, and therefore it was in the interests of Spanish missionaries to portray indigenous people as servants of the devil. This led to a deep-rooted tradition of portraying indigenous deities as demonic, as well as campaigns of iconoclasm targeting temples and sacred rocks, especially by Franciscan and Dominican friars. However, syncretistic traditions also developed that identified indigenous deities with Christian figures, such as the identification of Pachamama with the Virgin Mary. Indigenous Christian cults, such as the veneration of the miraculous image of Our Lady of Guadalupe in Mexico, were imbued with indigenous symbolism.

The Catholic Counter-Reformation itself brought controversy concerning images of the saints. The cult of images had been a major target of the Protestant reformers, and many Catholic scholars shared their concern that the popular veneration of images bordered on paganism. In the run-up to the Council of Trent there was debate about the restriction of the activities surrounding images, such as the lighting of candles before them, the honouring of images with crowns and vestments, and the multiplication of images of the same saint in one place. In the event, the Council did not go so far as to outlaw these practices, but in the aftermath of Trent, attempts were made in some areas to stamp out the cults of some saints entirely.

Baroque and Rococo artists largely disregarded any misgivings of the Counter-Reformation generation over images, but the debate over images reignited over a question that arose during missionary activity in China in the seventeenth century. The ‘Chinese Rites Controversy’ was an argument between the Jesuits on one hand and the Franciscans and Dominicans on the other about whether Chinese ceremonies involving images of Confucius were purely civic affairs invoking commonly recognised cultural symbolism or religious rites. The Jesuits defended the civic status of Confucian symbolism, while the friars regarded it as paganism. The dispute brought into sharp focus the problems raised by Catholic evangelization of a culture every bit as sophisticated in its use of symbolism as the Christian west. However, Rome came down on the side of the friars and banned the use of traditional rites for Chinese Christians in 1645, although debate continued into the eighteenth century.

Iconographic syncretism remains a major part of Catholicism in many countries today, with figures derived from pre-Christian religion often identified with Christ, the Virgin Mary or Christian saints. Determining the extent to which pre-Christian deities still enjoy any kind of independent religious existence in such cultures is a challenge for anthropologists of religion. Defenders of the use of Pachamama imagery at the opening of the Amazon Synod compare it with western Catholic use of pre-Christian imagery. It is far from clear whether such an equivalence exists, and it may be that only Amazonian Catholics themselves know the extent to which they venerate Pachamama as a deity in a manner inconsistent with Catholic orthodoxy. However, the age-old problem of syncretism – and the extent to which it should be allowed, encouraged or prohibited – continues to dog the Catholic faith in the twenty-first century. The question of whether ‘pagan’ indigenous statues should be destroyed in acts of iconoclasm has received a number of different answers over the centuries, with Catholics both advocating and opposing iconoclasm. However, spontaneous acts of lay iconoclasm, such as we saw on Monday morning, are rare in Catholic history, and when iconoclasm has occurred it has generally been authorised by church authorities.