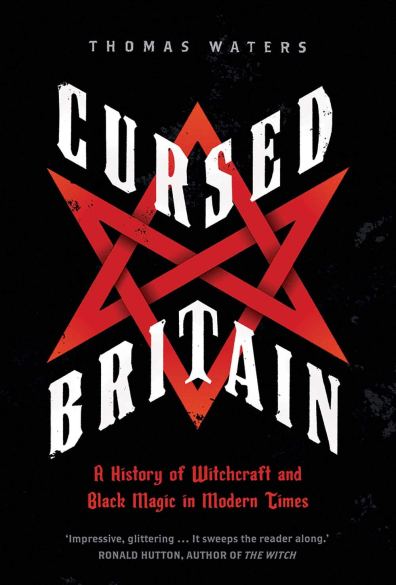 I have been eagerly awaiting Thomas Waters’ Cursed Britain ever since I learnt it was on the way, since the articles published by the author in the run-up to the book have been fascinating and of the highest quality. Cursed Britain is a history of the dark side of magic in Britain since 1800 – not a history of magic per se, nor of witchcraft, but a focussed study of belief in magical harm: whether caused by witches or by other magical practitioners. Waters also veers beyond what might strictly be considered the realm of magic, considering the role of the Irish cursing tradition in nineteenth-century Britain as well as the almost uncategorisable tradition of the Welsh ‘cursing well’ of Ffynon Elian. Waters’ focus in the book is not so much on a category of magical practice, or on its practitioners, as on people who believed themselves to be subject to magical harm. As such, the methodology adopted here has a strong affinity with mine in Magic as a Political Crime, where I focussed not so much on the question of whether people really did deploy harmful magic against political leaders, but on why people believed that this was happening. As such, Cursed Britain is a history of belief rather than a history of practices.

Waters draws on the extensive archive of Victorian newspaper reports of witchcraft-related incidents to show that belief in witchcraft was alive and well in the Victorian era, only truly declining sharply in the period 1919-1960, well within living memory. The traditional malefic English witch is not, of course, a magical practitioner in the usual sense; she or he need not be in possession of any magical skill, nor does she need to perform any ritual to harm another person: simply being a witch is enough. In the absence of trial records of accused witches in an era when witchcraft was no longer a crime, Waters focusses not on the witches themselves but on the people who claimed to be able to deliver people from witchcraft: the ‘unwitchers’ or cunning-folk. It is in the work of the unwitchers, Waters argues, that we can most clearly discern people’s deepest fears and come to understand what they really believed about witchcraft. What emerges is an inchoate sense of unease, engendered by misfortune, which folk tradition and the promptings of cunning-folk helped to give personal form: if things are going badly, repeatedly and inexplicably, someone must be to blame.

Waters observes that this basic stratum of witchcraft belief is largely impervious to education, perhaps partly because it is so vague. Yet it is also, it seems, almost a universal cultural constant – so much so that Waters suggests it may even be hard-wired into human beings as some sort of evolutionary response. True or not, the historian’s access to vast digitised repositories of Victorian local newspapers reveals that the persistent claims of moral and social improvers that belief in witchcraft was a thing of the past were simply false, or at least wishful thinking. Witchcraft belief only became less visible in the judicial record, Waters argues, because more effective policing from the mid-nineteenth century reduced the potential for the vigilante attacks on suspected witches that were a regular feature of rural life in the first half of the century.

Waters’ use of the evidence for nineteenth-century popular belief in witchcraft and magic is masterful, but the book breaks new ground in its attempt to link popular with elite belief. Waters begins by noting the eerie similarities between traditional witchcraft belief and some of the darker beliefs of mesmerists and Christian Scientists. He argues that something very like witchcraft belief emerged in the pseudo-sciences and new religious movements of the nineteenth century, thus ensuring that belief in black magic both endured and, in fact, gained a new acceptability within elite culture. The extent to which Spiritualism gave rise to new interest in the occult has been well documented by historians, but Waters broadens the conceptual net considerably. Waters also ventures into the British Empire, with a chapter on the effect of colonial experience in weakening British people’s prejudices against the possibility of occult power.

The question I am left asking is whether the rise of middle class interest in the occult in the second half of the nineteenth century – whether Spiritualism, Theosophy, the Golden Dawn or a cautious colonial awe of Indian and African magic – had any relationship with surviving popular belief in witchcraft and magic in English rural society. It does not appear, on the basis of Waters’ book, that there is sufficient evidence to posit much of a link, and therefore we are left with two different sections of English society, divided by class, believing in witchcraft (or something like it) for entirely different reasons. That is intriguing in and of itself – and perhaps not altogether surprising, given the notorious rigidity of class divides in Victorian England. Perhaps childhood provides one possible bridge between these worlds: if the children of colonial officials in India were being influenced by their ayahs, then surely middle class children brought up by working-class nurses in rural England were similarly affected by the stories they were told and the supernatural beliefs transmitted (unless these were thoroughly expunged by later education).

The final demise of traditional witchcraft belief, Waters argues, was largely as a result of the disappearance of the cunning-folk by around 1960. Although there are sporadic cases of individuals who deliberately cultivated a reputation as a witch, it was the cunning-folk who, in effect, created witchcraft in the vast majority of cases: they were the ones who persuaded their clients that they were being ill-wished or overlooked by the evil eye. Police attention made it harder for cunning-folk to operate in the towns, while in rural areas it became more difficult for cunning-folk to pass on their craft to others owing to shifts in demography and a popular culture that portrayed witches as figures of fun. In addition, people had less need to consult cunning-folk as modern conveniences and healthcare made their lives less unpredictable and filled with misfortunes.

Waters notes the irony that the repeal of the 1736 Witchcraft Act and 1824 Vagrancy Act came in 1951, just as the last embers of traditional witchcraft belief were dying, but not soon enough to save the cunning-folk from obsolescence. Where belief in ill-wishing survived, the vocabulary shifted from ‘witches’ and ‘witchcraft’ to ‘cursing’, and Waters shows that the belief in a ‘gypsy’s curse’ was one of the last echoes of traditional witchcraft belief to survive in late twentieth-century Britain. Indeed, it is the only echo I remember from growing up in the suburbs of an English country town in the 1980s – my mother’s fear that Roma women who came to the door selling dishcloths might put a curse on us if she did not buy something.

Thomas Waters’ argument that witchcraft belief depended for its survival on reiteration by professional service magicians, and that it disappeared because the service magicians vanished, is perhaps the major insight of this book. Commenting on the bewitchment of the West Country farmer John Lundy in the first decade of the 21st century, Waters makes the perceptive point that witchcraft is more distressing to the small minority of people who continue to believe in it in contemporary Britain because they know they will be treated with ridicule. Yet it is undeniable that people continue to believe in something like the traditional conception of witchcraft, although they do not use the word; in the early 2000s, I remember a schoolfriend assuring me with complete seriousness that a woman he worked with had the ability make bad things happen to people whom she ill-wished.

One intriguing question raised by Waters’ examination of the last phase of traditional witchcraft belief is to what extent it intersected with practices deriving from Neo-Pagan Wicca. Waters rightly concludes that Gardnerian Wicca in its ‘orthodox’ formulation bore little if any relation to traditional witchcraft belief, and instead focusses on ‘hedge witches’ and independent occult practitioners inspired by the spirituality of Wicca but alienated by its emphasis on collective spellcraft by the coven. Certainly, self-initiated individuals self-identifying as ‘witches’ who belong to no Neo-Pagan group seem to be becoming more common. The vast majority of these individuals derive their spirituality and practice from books, but was there a period – perhaps in the 1960s and 70s – when the occult revival overlapped and coincided with the last lingering traces of traditional rural witchcraft belief? I am reminded of a conversation I had with a man who, as a schoolboy in the early 1960s, had become fascinated with witchcraft and interviewed a woman living in Epping Forest who self-identified as a witch but was also apparently a traditional herbalist. He thought he might still have the notes he took of their conversations – but it turned out he had thrown them out long ago. Had they survived, these documents might have been very important indeed in understanding how new and old occultism interacted at this crucial transitional period.

One area in which traditional belief and new ideas very clearly interacted was in the late 20th-century revival of exorcism. It is a shame that Waters wrote the section of Cursed Britain about exorcism before the publication of my book A History of Anglican Exorcism, since he might then have been able to explore the deeper origins of the revival that occurred in the 1960s and 70s. As I have shown, the revival in the Church of England began in the 1920s and was indigenous rather than being imported from elsewhere.

Cursed Britain leaves the reader unsettled, because it highlights how recently belief in witchcraft has disappeared from mainstream British culture, and leaves hanging the possibility that belief in witchcraft – or something like it – could still reassert itself within our society. At least some of the conditions that Waters suggests led to a decline in witchcraft belief in the twentieth century are, after all, unravelling. In a future Britain suffering deep and prolonged economic hardship as a result of a no deal Brexit, where the NHS has broken down, climate change is bringing in new and unfamiliar diseases, antibiotics are no longer effective, and people’s grasp of evidence (and even causality) has been weakened by the corrosive effect of social media, it is it too much to imagine a revival of accusations of witchcraft? It is the stuff of nightmares, perhaps – but could witchcraft be as much a feature of Britain’s future as its past?

I would encourage everyone to read Cursed Britain, whether they are interested in the history of occult beliefs or not, because it is a profoundly insightful book that raises deep questions about the nature of belief, social change and the assumptions we make about both history and the present we think we inhabit.