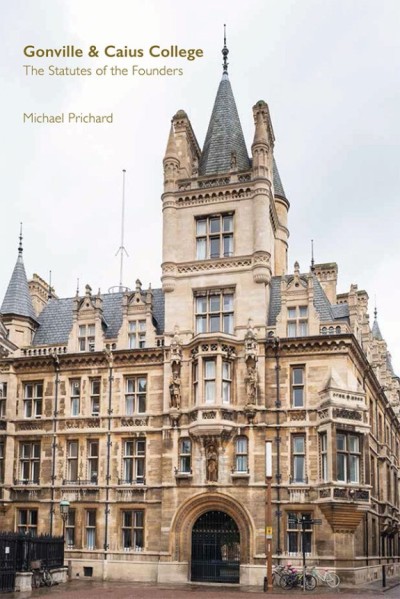 My review of Michael Pritchard’s edition of the statutes of Gonville & Caius College, Cambridge, Gonville & Caius College: The Statutes of the Founders has just appeared in volume 107 of the Proceedings of the Cambridge Antiquarian Society. The volume sees the college statutes of Edmund Gonville (d. 1351), William Bateman (c. 1298-1355) and John Caius (1510-73) published in a single edition for the first time, along with translations and a detailed commentary. Gonville and Caius College, which was originally founded by Gonville in 1348 as Gonville Hall, was extensively patronised by William Bateman, Bishop of Norwich and then subsequently re-founded as Gonville and Caius College by Dr John Caius in 1557. Although many Cambridge colleges have interesting histories, the history of Caius College is of particular interest to me because (apart from the fact that I studied there as an undergraduate) the college always had a special connection to East Anglia. Notoriously, Caius stipulated in his statutes (based on similar but less strict provisions in the statutes of Gonville and Bateman) that fellows of the college had to have been born in Norfolk or Suffolk. A significant proportion of students at the college in the sixteenth and seventeenth centuries came from the grammar school in Bury St Edmunds.

However, even more interesting than the college’s East Anglian predilections is its religious history. The college was unique in being founded in Mary I’s reign, during a period when Cardinal Reginald Pole was presiding over intense efforts to turn the university into a Counter-Reformation seminary. Whereas many Cambridge colleges may be thought of as medieval institutions surviving into the present day, Caius College is a rare relic of that brief period in which England became part of the world of Counter-Reformation Catholicism. Even the accession of Elizabeth in 1558 did not put an end to the college’s function as a Counter-Reformation seminary; Caius himself and many of the fellows remained stubbornly Catholic and the college continuously turned out students who later trained for the priesthood abroad, often returning to keep the Catholic faith alive in East Anglia and elsewhere. The college’s religious conservatism lingered even into the 1580s, and eventually merged into the anti-Puritan Arminian strand of Anglican conformism that emerged at the end of the sixteenth century. In the 1630s the college was a stronghold of Laudianism, as the beautiful gilded cherubs on the roof of the college’s chapel still testify. Even when I was a student at Caius, the Dean regularly celebrated Holy Communion using the Latin prayer book of Queen Elizabeth, which was often the refuge of crypto-Catholics in the university who wanted to remain as close as possible to the mass without defying the crown.

Michael Pritchard’s edition is a valuable addition to the library of anyone interested in academic history, and essential for anyone with an interest in the history of the University of Cambridge.