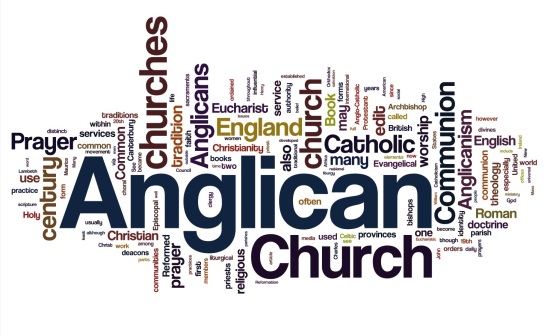 Something I’ve wanted to write about here for some time is the pitfalls of using the words ‘Anglican’ and ‘Anglicanism’ as descriptors of the established Church of England in historical writing. It is a personal bugbear of mine that many historians who are not specialists in church history (and, perish the thought, some who are…) casually describe the established church in England not in communion with the See of Rome as ‘Anglican’, at any time between the break with Rome (in 1534) and the present. In this 500th anniversary year of the Reformation, the difficulties of accurately describing those who departed from the Catholic church in the sixteenth century are very much to the fore. Most historians are now aware of the dangers inherent in the word ‘Protestant’, preferring more precise labels such as ‘Lutheran’, ‘Calvinist’, ‘Zwinglian’ or (in an English context pre-1559), ‘Gospellers’. England poses particular difficulties in this regard, because non-Catholic English people in the sixteenth century were not usually followers of one particular brand of reformist Christianity (with notable exceptions such as the Lutheran Robert Barnes). Instead, their religion was something of a pick ‘n’ mix of reformist doctrines set within an institutional and legal framework inherited from the medieval church.

The term ‘Church of England’ is an English translation of the term ecclesia anglicana used by Thomas Cranmer to describe the fiction he wove of an English ‘imperial’ church free from papal influence in times past, over which the pope was supposedly claiming a usurped authority. Understood in these terms, the ‘Church of England’ was an English version (or English flavour) of the Catholic church, headed by the monarch instead of the pope, and use of this term implied no doctrinal deviation from Rome on the part of  the English church. Although the term ecclesia anglicana was also used in Latin by Catholics to refer to English Catholicism, Catholics then and now tended to translate it as ‘the Church in England’ – a subtle but important difference. Today, the term ‘Church of England’ is acceptable to all adherents of the established church in England because it implies no doctrinal affiliation; Anglo-Catholics may be more content with the ‘Catholicism in an English style’ of Henry VIII, and evangelicals with the austere and thoroughgoing Edwardine reform of the 1550s; both are equally ‘the Church of England’.

Once the global dimensions of ‘Anglicanism’ are taken into account, the picture becomes even more murky. There is, of course, an ‘Anglican Communion’ – a (very) loosely constituted global association of national churches in communion with the See of Canterbury. It is well known that many of the churches that form part of the Anglican Communion are barely in communion with each other, and by the same token the See of Canterbury is in communion with churches that are not considered part of the Anglican Communion, such as the Old Catholic Church of Utrecht and those Lutheran churches that are part of the Porvoo Agreement. The use of the term ‘Anglican’ to describe the communion is troubling, because it has overtones of colonialism when applied to those episcopal churches in former colonial territories that were once under the jurisdiction of the Church of England. It is also troubling because other churches in the communion have no ‘genetic’ link to the See of Canterbury. The Church of Ireland, for example, sees itself as the continuator of St Patrick’s ancient mission in Ireland just as the Church of England sees itself as the continuator of St Augustine’s ancient mission in England. Although the Church of Ireland was reformed under English royal authority in the sixteenth century, Ireland was then a separate kingdom and the Irish church remained independent of the Church of England until 1801; Irish independence in the twentieth century led the Church of Ireland to play up its indigenous Irish credentials. To describe the Church of Ireland as ‘Anglican’ is to subordinate it to Canterbury in a way that is potentially offensive to many Irish episcopalians; it would be better described as ‘Hibernican’ – along with those churches, such as the Spanish Reformed Episcopal Church, that were founded by the Church of Ireland.

Aside from the very doubtful validity of any global concept of ‘Anglicanism’, some adherents of the Church of England do not like to be called Anglicans. This may be because they identify, first and foremost, as Catholics and evangelicals. At the Catholic end of the spectrum, some prefer to self-identify as Catholics within the Church of England, tracing a direct descent from the medieval church and part of the one, holy, catholic church of which the Roman Catholic and Orthodox churches are also a part. They are not Anglicans, or even Anglo-Catholics, but Catholics who happen to worship in a Church of England parish church. At the evangelical end of the spectrum there are individuals with little or no interest in episcopal government who consider themselves no different from the Presbyterians or Baptists down the road apart from the fact that they worship in a Church of England church. For both of these groups, the ‘Anglican’ label serves no purpose because there is nothing distinctively ‘Anglican’ about how they believe or worship.

Returning to history, the problem with the use of the term ‘Anglican’ is that it implies a unique and specific theological identity for the Church of England and its adherents. The Church of England has always been riven with faction, first between conservatives (Henry VIII-style Catholics) and reformists in the period 1534-1553, then between Puritans and anti-Puritans between 1559 and 1646 (when the Puritans finally won and the Church of England was abolished), then between conformists and Non-Jurors in the period 1688-1788, then between conformists and Methodists (before the Methodists separated in 1794), then between various varieties of low and high churchmen throughout the nineteenth and twentieth centuries. Furthermore, for most of ‘Anglican’ history, scarcely anyone in England would have thought of their beliefs and practices as a distinct variety of Christianity. Most described themselves as just ‘Protestant’, and worshipped in the parish church in the way that the Prayer Book directed in the way their fathers and mothers worshipped before them. A strong Nonconformist presence in the locality sometimes led people to self-identify as churchmen and churchwomen (often with connotations of the prestige attached to conforming to the religion of the king and squire), but this was as far as ‘Anglican’ self-awareness went until at least the 1830s.

Nevertheless, some historians apply the term ‘Anglican’ from the very beginning of the English reformation – although I don’t think anyone with even an inkling about church history would presume to call Henry VIII an Anglican. Others take 1559 as the terminus post quem of Anglicanism, on the grounds that the Church of England of today can be traced from the Elizabethan religious settlement. This latter statement is not incorrect, but it does not mean that the ‘Anglican’ neologism can be applied to the 1560s. Others are more circumspect, declining to use the term before 1660, the year of the Restoration of the monarchy which heralded the re-constitution of the Church of England. Still others begin to refer to ‘Anglicanism’ only after 1688, when toleration of dissenters meant that the Church of England ceased to be the national church in the true sense and therefore ‘Anglicans’ acquired an identity (but, as we have seen, this identity was very limited indeed). Others might wait until the separation of Wesleyan Methodism as a separate denomination. Yet it was only in the mid-nineteenth century that the term actually came into use.

Worse than inappropriate use of the ‘A’ word by historians is what they leave it to imply. I shall not name names, but some distinguished historians have made use of such phrases as ‘Anglican moderation’ or ‘Anglican scepticism’ in discussions of the seventeenth and eighteenth centuries, as if ‘Anglicanism’ was an ideology that predisposed people to certain patterns of thought. This is nothing less than an historical fallacy; I am very doubtful that anyone can make a case that such a thing as ‘Anglicanism’ existed before the nineteenth century (if indeed it really exists now), but even if it did it was a phenomenon too fractious for us to presume to associate particular modes of thought with it. Of course, I know what these historians are trying to get at when they talk of ‘Anglican moderation’ – clergy of the established church, on the whole, were inclined to rationalism in the eighteenth century – but the choice of words is an historiographical faux pas at best and gravely misleading at worst.

So should the historian ever write about ‘Anglicans’ and ‘Anglicanism’? On one level, it seems difficult (and perverse) not to do so when ‘Anglicans’ themselves self-define in this way (which some – but not all – adherents of the Church of England have since the middle of the nineteenth century). But to use the term before the 1830s is, in my view, misleading unless the historian takes care to justify his or her actions very carefully. Writing a book covering the totality of ‘Anglican’ history (like my Inferior Office: A History of Deacons in the Church of England) poses a particular challenge – to what extent is it historically valid to reify the Church of England, or perhaps more importantly a Church of England (or ‘Anglican’) tradition? How do we tell that history against a background of shifting models of self-definition by adherents of the Church of England/’Anglicans’? I am not sure I have any easy answers to these questions, but they are worth investigating – and it is time for historians to drop the lazy use of the deeply problematic ‘A’ word when writing about early modern English religion.