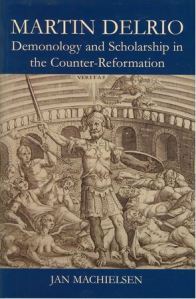 My review of Jan Machielsen’s superb new biography of the sixteenth-century Jesuit scholar and demonologist Martin Delrio (or Del Rio, 1551-1608) has just been published on the Institute of Historical Research’s Reviews in History website. It is hard to praise this book too highly, since it has the potential to shift the way in which we see the Counter-Reformation. Machielsen argues against a purely hierarchical conception of Catholic reform and makes the case for a textual Counter-Reformation driven by ongoing humanist scholarship, which was channelled rather than stifled by the Council of Trent. He also does scholars of early modern demonology a great service by analysing in depth the philosophical roots of Delrio’s writings. Highly recommended!