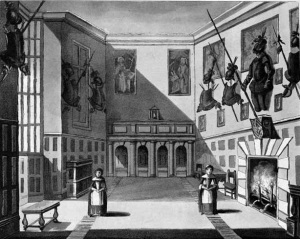 Inspired by an excellent article by Nicola Miller on ghost stories of Suffolk, I thought I would write a short post on one of the ghost stories I have unearthed, which is described in detail on pp. 105-108 of my English Catholics and the Supernatural. The story is unusual because it is accompanied by an illustration – a mezzotint (yes, if you know your M. R. James stories you should already be getting a chill up your spine). Illustrations of ghosts from the period in question are extremely unusual, and when they do occur they are usually satirical. There is nothing funny about this mezzotint, which dates from 1807 and depicts the ghosts of two women emerging from portraits at the end of the great hall of Coldham Hall and walking towards the staircase. The illustration was commissioned by Sir Thomas Gage, 7th Baronet of Hengrave and Coldham who owned the house, although at the time the ghost sighting took place Coldham Hall, the ancient family home of the Rookwoods, was occupied by a tenant called General Hammond. One night, Hammond’s servant was carrying a tray upstairs when he dropped it with a great clatter. When asked why, he described the scene that was later depicted in the mezzotint. One of the curious features of the servant’s description is that the women who came from the portraits were not dressed like the women in the portraits, who are both nuns of the seventeenth century. The women depicted in the mezzotint seem to be in the secular dress of the same period.

The above photograph, from the Spanton Jarman collection, shows the two original portraits, still in the great hall at Coldham in the 1900s (albeit in a slightly different position). Indeed, the portraits have not always been in the great hall – the earliest recorded reference to them, an inventory of 1737, has them on the staircase. I have attempted, not altogether successfully, to identify the nuns in the portraits: the nun whose hand is resting on a skull is probably Jane Cary (Sister Frances of St Ignatius), who was Sub-Prioress of the Canonesses of the Holy Sepulchre at Liege in 1642. The other remains something of a mystery, but she appears to be dressed in the same habit.

There is only one surviving copy of the mezzotint of the ghosts, which is in Cambridge University Library amongst the rest of the papers of the Rookwood and Gage families. However, a garbled memory of the haunted portraits survived at Coldham Hall, even though I have found no evidence that anyone discovered the original mezzotint and story before I did in 2010. In 1979 the then owner of Coldham Hall, Richard Duce, told a story that there were two cursed portraits in the great hall, which should never be taken down. Even when cleaned, the pictures were only ever moved along the picture rail. Whether he had proved this to be true by experience or not, Mr Duce did not say, but the story is reminiscent of other tales from around the country of objects (often skulls) that should not be removed from a house in case of bad luck.

There is another peculiar twist to this story. Although Coldham Hall has been sold many times, and its contents dispersed, the two portraits have never been sold; or, if they have, the new owner has seen fit to return them. Coldham was sold for the last time in 2002, to the supermodel Claudia Schiffer and her husband Matthew Vaughn. It seems that the couple decided to move the paintings, because within a short while they were troubled by paranormal happenings. Claudia Schiffer apparently called in a psychic medium, who advised that the paintings should be restored to their original position. Or so the tabloid press reported: a demonstration that sometimes the most lurid and sensational stories have a surprising historical basis!

English Catholics and the Supernatural also contains another Suffolk ghost story, the surprising haunting of Flixton Hall by Humphrey Burgoine, but that will have to wait for another time…

This entry was posted on December 6, 2014 by jacobite.