The Knole witch marks: a note of caution 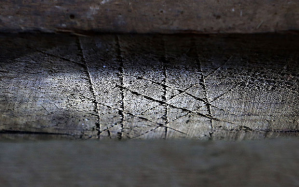 Yesterday’s press was full of news that a series of apotropaic ‘witch marks’ have been discovered under the floor of a room in Knole House in Kent. The joists on which the witch marks appear have been dated by dendrochronology to the year 1606, when James I and VI was due to pay a visit to the house. The room in question was renovated in advance of the royal visit. Reports on BBC local news reported that the witch marks form a sort of protective ‘box’ around the hearth, as if to protect the King from any evil influences that might come down the chimney. The reports have led to much speculation by historians and archaeologists that James was feeling vulnerable in the aftermath of the Gunpowder Plot: this, combined with his well-known fear of witches, supposedly explains the presence of the Knole witch marks.

It is always exciting to be able to link an archaeological discovery to a historical event, but I believe there are good reasons to pour some cold water on the speculations surrounding Knole. We really have very little idea what apotropaic marks were actually for, or of the precise intentions that lay behind them, since no surviving source describes the creation of such marks and the reasons behind it. However, that is not the main reason that the claims surrounding Knole began to trouble me yesterday. I was principally disturbed because the speculations drew on a stereotyped view of James I and his reign. Decades (even centuries) of Shakespeare scholars commenting on Macbeth and its links to the Gunpowder Plot, combined with an uncritical assumption that the preoccupations of James’s Scottish reign continued after his accession to the English throne, have led many historians to the lazy assumption that James was obsessed with witchcraft, and that he and his courtiers interpreted every hint of treason against him as a demonic attack.

It was a central plank of my argument in English Catholics and the Supernatural that Catholics were never accused of witchcraft in Elizabethan and Jacobean England, even when they were accused of treason. The connection between witchcraft and treason at this period was a moralistic and rhetorical one: ‘For rebellion is as the sin of witchcraft’ (I Samuel 15:23) was understood, even by the most literal of preachers, as a comparison of two sins rather than a statement that traitors were actually witches. In fact, the reign of James I in England saw ‘magical treason’ virtually disappear as a category of attacks on the person of the monarch (in contrast to Elizabeth I, who experienced more attempted or imagined magical attacks than any other English monarch). Furthermore, even when magical treason did happen, the people accused of perpetrating it were male ritual magicians and not witches. The extent to which witchcraft was free of any political ramifications in seventeenth-century England is remarkable, but no matter how hard you look at the evidence, it is virtually impossible to find any links being drawn between specific acts of witchcraft and any kind of threat to the monarch and the state. The situation was completely different in Scotland, and of course it is true that witchcraft in general (like the proliferation of any sin in a godly commonwealth) was thought to be a threat to the state: but that is rather different from saying that witches were suspected of treason, or that traitors like the Gunpowder Plotters were suspected of witchcraft. Both of these ideas are historical fantasy, unsupported by the evidence.

Furthermore, the evidence strongly suggests that James had actually lost in witchcraft by the time he succeeded to the English throne in 1603. Yes, the accession was marked by a rash of popular plays about witchcraft, the republication of James’s Daemonologie, and the passing of the 1604 Witchcraft Act: but, as P. G. Maxwell-Stuart has argued, these events had more to do with sycophancy towards the new King than they did with James’ own views. James never pressed Parliament to produce the 1604 Act, and James’s scepticism about the possession and bewitchment of Mary Glover showed that his views seem to have undergone some change between the writing of Daemonologie and his English reign. Most importantly of all, however, James had no personal fear of witches. This is hard for historians to accept who think that such a ‘superstitious’ belief must be based on fear, but it is nevertheless true. James’ attitude to witchcraft is best described as ‘curiosity’ or even ‘prurient interest’. However, his faith in the power of his divine right was so strong that he believed witches were powerless to harm an anointed king. This was the fruit of his extensive experience of attacks from witches in Scotland: not fear or paranoia, but an overriding sense of his own invulnerability.

Finally, there are many alternative explanations for the witch marks at Knole, other than the idea that they were deliberately commissioned by the owner to protect the King. The workmen who undertook the work may have done this wherever and whenever they constructed a new floor, and they may not even have known that the King was about to visit. Archaeology seldom yields one definite historical explanation of material remains, much as the media would like this to be the case. Overall, the Knole witch marks are a good story, but unfortunately the interpretation that has been placed on them trades on outdated historical views of James I and his reign.

8 comments on “The Knole witch marks: a note of caution”

This entry was posted on November 6, 2014 by jacobite.