Where is St Edmund? 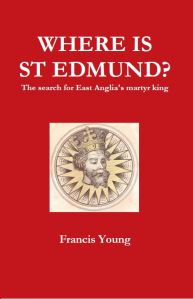 I have just published a short book entitled Where is St Edmund? The search for East Anglia’s martyr king under the imprint of East Anglian Catholic History Centre. The book is a digest of some of my recent research on the post-Reformation cult of St Edmund, the rest of which will be published elsewhere. However, the sections that have been incorporated in Where is St Edmund? deal specifically with the contested issue of the fate of St Edmund’s remains after 1539. The body of St Edmund has been the subject of numerous theories since 1644, when Pierre de Caseneuve first suggested that St Edmund had, in fact, been in the Basilica of St Sernin in Toulouse since 1216. My research has strongly challenged that theory, which was revived by Fr Bryan Houghton in the late 1960s, and I concentrate instead on the importance of an infuriatingly vague piece of evidence that I unearthed in Bene’t Weldon’s MS chronicle of Douai Abbey (with the kind assistance of Abbot Geoffrey Scott). This is a story by a former Prior of St Edmund’s at Paris, William Hitchcock, to the effect that his great-grandfather had been involved in hiding the body of St Edmund in an iron chest in 1539. I conclude that, in all probability, this story reflects the truth and that St Edmund was hidden by the monks somewhere within the monastic precincts that are now the Abbey Ruins in Bury St Edmunds.

The book can be purchased here, and it is also on sale at the Buttermarket branch of Waterstone’s in Bury St Edmunds, as well as St Edmundsbury Cathedral Shop and Churchgate Books in the same town. There are also copies in the local studies section at Bury St Edmunds public library and at the Bury branch of the Suffolk Record Office.

I shall be signing copies of the book at St Edmundsbury Cathedral Shop at 11.30am on Sunday 21st September.