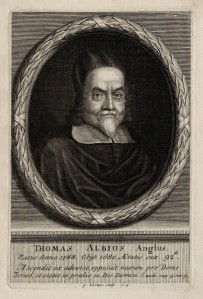 Yesterday I travelled down to Brentwood in order to deliver a paper to the Essex Recusant Society on one of Essex’s great Catholic sons, the philosopher and theologian Thomas White. White was probably the single most controversial figure in the seventeenth-century English Catholic community, but my paper argued that we ought to look beyond White’s support for Oliver Cromwell (much as we need to look beyond Martin Heidegger’s support for Hitler), and judge his ideas by their own merits. I argued that White was a visionary thinker who saw through the shortcomings of the ‘modern’ philosophy touted by the likes of Descartes and realised the continuing importance of the intellectual framework inherited from Aristotle.

I have uploaded the full text of my paper here.

I am grateful to Isobel Parks for inviting me to speak to the Essex Recusants again, and I was especially privileged to meet and talk with Sr. Gabriel O’Driscoll, who is the last surviving founder member of the Society. The South Eastern Catholic History Society was the first local Catholic history society founded in Britain, in 1958. I was also pleased to hear that the Society’s journal, which has had a lull in publication for the last couple of years, is due to start up again.